Free Speech in the New Media 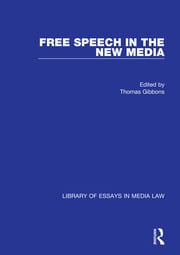 Free Speech in the New Media

This volume deals with questions of political and constitutional principle and theory that affect the law and regulation of content in new media that are based on digital technology. In the light of convergence between different forms of communication, it examines whether the justifications for government intervention in traditional analogue broadcasting and programme delivery continue to be persuasive. The essays examine in general whether new approaches to freedom of expression are required in the digital era and whether there is a continued role for public service broadcasting or its equivalent. They also explore content standards in more detail, discussing arguments for and against regulation in the areas of beliefs, indecency and advertising and whether there is a case for the European Union's measures to secure "Television without Frontiers".

Thomas Gibbons is a Professor in the Department of Law at the University of Manchester, UK

'This collection provides an insight into how the logic of the new media will ultimately compel the law.' Law Society Journal