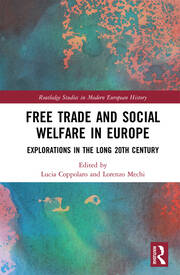 Free Trade and Social Welfare in Europe: Explorations in the Long 20th Century

This book deals with the historical relationship between international trade liberalisation – one of the backbones of globalisation – and the development of social welfare. In Europe the issue has regularly been at the centre of the political debate for at least two centuries, and still nowadays it continues to inspire decisions of the highest order, as in the recent case of Brexit. Analysing a number of particularly meaningful episodes and moments, the eight chapters of this edited volume provide an overview of how the liberalisation/welfare nexus has been addressed in Europe since the end of the 19th century. Describing the oscillations from phases in which state, non-state and transnational actors saw the two elements as widely conflicting, to others in which more harmonious visions prevailed, the book uncovers the political complexity of the issue and contributes to clarifying its connections with the current economic situation, political balances and general social conditions.

Introduction: free trade and social welfare in a long-term perspective

2 From cradle to grave: the German trade union federation’s wage, welfare and competitiveness programme for the Weimar Republic

4 A precondition for economic integration? European debates on social harmonisation in the 1950s and 1960s

5 The International Chamber of Commerce: the organisation of free-trade and market regulations from the interwar period to the 1960s

Creating a social Europe or completing the Single Market? Debates within the European Economic Community (1973–86)

7 Resisting globalisation? The TUC, the CBI and the politics of protectionism in the UK textile industry in the 1970s

8 Surfing (in and out of ) the globalisation wave: labour standards during the GATT/WTO trade negotiations (1947–99)

Conclusions: the European social dimension in search of a frame

is an associate professor at the Department of Political Science, Law and International Studies, University of Padova

is an associate professor at the Department of Political Science, Law and International Studies, University of Padova