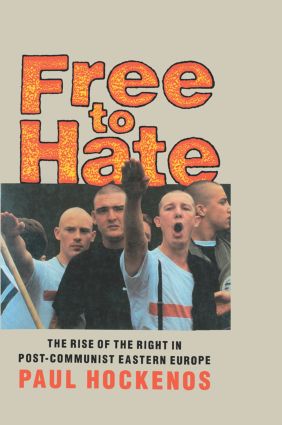 The Rise of the Right in Post-Communist Eastern Europe, 1st Edition

Combining first-hand reporting, original documentation, and political analysis, Free to Hate is the first major work in English to investigate the rise of the ultra-nationalist and radical right-wing movements that have been sweeping Central and Eastern Europe since 1989. In this powerful volume, Paul Hockenos provides an account of the emergence and contemporary relevance of far right movements in countries including Germany, Hungary, Romania, and Poland. In addition, he discusses neo-Nazi youth subculture, anti-Semitism, racism, minority issues, and the revision of history in the post-communist states.

"Hockenos provides the best English-language account of how a neofascist underground developed in the self-avowed antifascist state." -- The Progressive

"Paul Hockenos, the Central and Eastern European correspondent for In These Times, has written a pioneering and readable account of the rise of the extreme right in contemporary Eastern Europe." -- Washington Post Book World

"…Free to Hate is a detailed and well-reported survey of the emerging far right in Eastern Europe, a region where rabid demagogues have thrived since 1989. Hockenos has done a fine job of unravelling the right's many strains, connecting the different movements to their historical, religious or cultural antecedents." -- Toronto Globe and Mail

"…his reportage is vital, exhaustive and frightening." -- The Bulletin, Vancouver BC

"The rise of the far right in the former communist countries of Eastern Europe is a specter hanging over the continent. In this detailed, comprehensive and eminently readable book, Paul Hockenos turns the spotlight on an alarming legacy of communism." -- Steve Platt, Editor, New Statesman & Society

"Rich in details and anecdotes, Free to Hate is the first important book on the new right-wing specter haunting Eastern Europe and the post-communist world. Paul Hockenos, whose journalistic reports from Eastern Europe have consistently been among the best, has done an impressive job in putting together so much information, from so many countries, into an exciting, informative, well-written book." -- David Ost, Hobart and William Smith colleges

"Paul Hockenos has tackled one of the most difficult and disturbing problems of our time--the rise of right-wing fascist violence in post-communist Eastern Europe. Unfortunately, it is a problem that will be with us for many years to come, and it is as threatening to all of us as the communist ideology that it has replaced. Every concerned citizen should read this detailed and insightful account of the rise of nationalist movements following the 1989 revolutions in Eastern Europe, in order to understand the complex origins of this phenomenon and to participate in finding solutions before it is too late." -- Jeri Laber, Executive Director, Helsinki Watch

"Paul Hockenos gives a well-researched, vivid, and rather detailed picture of the excesses and atrocities of neo-nazi groups in Germany, the skinheads' attacks on Roma or Vietnamese and African workers and students in the Czech Republic, Hungary, and Romania…The book is full of valuable information and details." -- Canadian Committee of Labour History

"Hockenos' book is a must read for anyone who wants to understand the nature of right-wing sentiments and prejudices which when misused can lead to discrimination, ethnic cleansing, and even wars." -- Jan Kavan, International Network for Democratic Solidarity and member of the Czechoslovak Parliament, 1990-1992

Paul Hockenos is Central and Eastern European Correspondent for In These Times. His work has appeared in numerous publications including The Nation, New Statesman and Society, and The Village Voice. He presently resides in (East) Berlin.