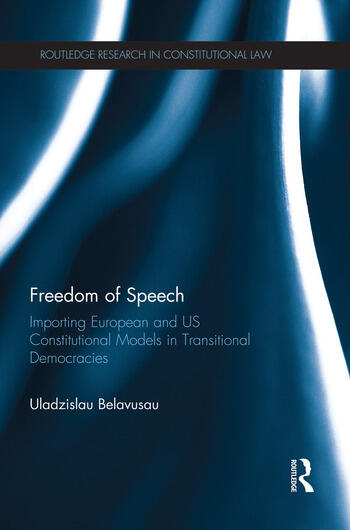 Freedom of Speech: Importing European and US Constitutional Models in Transitional Democracies

This book considers the issue of free speech in transitional democracies focusing on the socio-legal developments in the Czech Republic, Hungary, and Poland. In showing how these Central and Eastern European countries have engaged with free speech models imported from the Council of Europe / EU and the USA, the book offers valuable insights into the ways States have responded to challenges associated with transformation from communism to Western democracy.

The book first explores freedom of expression in European and American law looking particularly at hate speech, historical revisionism, and pornography. It subsequently enquires into the role and perspectives of those European (mandatory) and US-American (persuasive) models for the constitutional debate in Central and Eastern Europe. The study offers an original interpretation of the "European" model of freedom of expression, beyond the mechanisms of the Council of Europe. It encompasses the relevant aspects of EU law (judgments of the Court of Justice and the harmonised EU instruments) as mandatory standards for courts and legislators, including those in transitional countries of Central and Eastern Europe. The book argues for de-criminalisation of historical revisionism and pornography, and illuminates topics such as genocide denial, the rise of Prague and Budapest as Europe’s porno-capitals, anti-Semitism and anti-Gypsyism, religious obscurantism and homophobia, virulent Islamophobia, and the glorification of terrorism.

This book will be of interest to students and scholars of, comparative constitutional law, law and society, human rights and European law as well as political philosophers.

Dr. Uladzislau Belavusau is Assistant Professor at the Vrije University Amsterdam, the Netherlands.