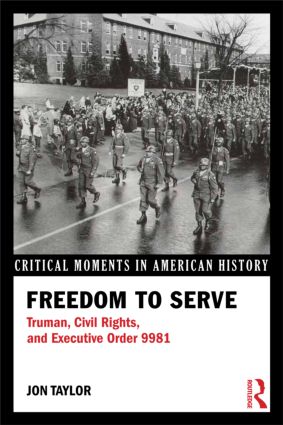 On the eve of America’s entry into World War II, African American leaders pushed for inclusion in the war effort and, after the war, they mounted a concerted effort to integrate the armed services. Harry S. Truman’s decision to issue Executive Order 9981 in 1948, which resulted in the integration of the armed forces, was an important event in twentieth century American history.

In Freedom to Serve, Jon E. Taylor gives an account of the presidential order as an event which forever changed the U.S. armed forces, and set a political precedent for the burgeoning civil rights movement. Including press releases, newspaper articles, presidential speeches, and biographical sidebars, Freedom to Serve introduces students to an under-examined event while illuminating the period in a new way.

For additional documents, images, and resources please visit the Freedom to Serve companion website at www.routledge.com/cw/criticalmoments

In Freedom to Serve, Jon E. Taylor traces the development of civil rights policy in the American military from the World War II era to the present, focusing on the civil rights campaigns that pressured the Franklin D. Roosevelt and Truman administrations for faster and greater change. Better yet, he does so in a way that shows students how a historian works and encourages them to think through historical problems themselves with the primary source documents he includes--some of them well-known, others previously obscure. Freedom to Serve is a terrific teaching tool.

Chapter One Franklin Roosevelt, African Americans and the Coming of

Chapter Two Politics and the Quest for an Integrated Military, 1937-1945