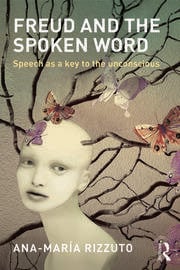 Freud and the Spoken Word: Speech as a key to the unconscious

There is extensive literature on Freud and language; however, there is very little that looks at Freud’s use of the spoken word. In Freud and the Spoken Word: Speech as a key to the unconscious, Ana-María Rizzuto contends that Freud’s focus on the intrapsychic function and meaning of patients’ words allowed him to use the new psychoanalytic method of talking to gain access to unconscious psychic life. In creating the first ‘talking therapy’, Freud began a movement that still underpins how psychoanalysts understand and use the spoken word in clinical treatment and advance psychoanalytic theory.  With careful and critical reference to Freud’s own work, this book draws out conclusions on the nature of verbal exchanges between analyst and patient.

begins with a close look at Freud’s early monograph On Aphasia, suggesting that Freud was motivated by his need to understand the disturbed speech phenomena observed in three of the patients described in Studies on Hysteria.  She then turns to an examination of how Freud integrated the spoken word into his theories as well as how he actually talked with his patients, looking again at the Studies in Hysteria and continuing with the Dora case, the Rat Man and the Wolf Man. In these chapters, the author interprets how Freud’s report of his own words shed light on the varying relationships he had with his patients, when and how he was able to follow his own recommendations for treatment and when another factor (therapeutic  zeal, or the wish to prove a theory) appeared to interfere in communication between the two parties in the analysis.

Freud and the Spoken Word

examines Freud’s work with a critical eye. The book explores his contribution in relation to the spoken word,  enhances its significance, and challenges its shortcomings.  It is written for psychoanalysts, psychotherapists, Freud’s scholars and academics interested in his views on the words spoken in life and in psychoanalysis.

Argentine born Ana-María Rizzuto trained in psychoanalysis in Boston and was for forty years in the PINE Psychoanalytic Center Faculty and is Training and Supervisory Analyst Emerita. She has made significant contributions to the psychoanalysis of religious experience and has written in national and international journals about the significance of words in the clinical situation.  She has written three books and lectured about her work in North America, Latin America, Europe, and Japan.

Preface. Introduction: Freud, Psychoanalysis and the Spoken Word. Breuer, Freud, the Talking Ladies, and the Monograph On Aphasia. Hysteria as Asymbolic Aphasia. The Function of the Spoken Word in The Interpretation of Dreams. Pliable Words, Scenes, and the Unconscious. Freud’s Technique: Translating Unconscious Scenarios into Words. Freud’s Theories: Repression as Gaps in Consciousness and the Words to Fill Them. How did Freud Talk with his Patients? Conclusions.

Argentine born Ana-María Rizzuto trained in psychoanalysis in Boston and was for forty years in the PINE Psychoanalytic Center Faculty and is Training and Supervisory Analyst Emerita. She has made significant contributions to the psychoanalysis of religious experience and has written in national and international journals about the significance of words in the clinical situation.  She has written three books and lectured about her work in North America, Latin America, Europe, and Japan.

This book is the culmination of Ana-Maria Rizzuto's lifelong study of Freud's 1891 Aphasia monograph. Although its scientific merit was recognised decades ago by neurologists, the monograph was curiously orphaned by Freud himself. In this book, Rizzuto demonstrates with definitive authority its seminal importance for psychoanalysis. Although not her main intention, she simultaneously opens new lines of interdisciplinary enquiry regarding some contemporary neuropsychological topics, such as the role of declarative memory (Freud's 'word presentations') and episodic recall (Freud's 'scenes') in reflexive consciousness. - Mark Solms -- Professor in Neuropsychology and Chair of the Research Committee of the IPA

Rizzuto’s accurate, precise and inspired analysis of Freud’s On Aphasia is the scarlet thread that runs through the whole book, weaving interconnections with some of the problems facing psychoanalysis today.  The title Freud and the Spoken Word is essential for defining the field of research not about language but about the individual and unrepeatable linguistic act of the speaker.

The author lists not only the prominent qualities of Freud’s theories but also its limitations: the lack of an agent, of the addressee, and affect as a dischargeable quantity. Rizzuto’s important book addresses their relevance to psychoanalysis. - Prof. Jorge Canestri, MD, Training analyst, Italian Psychoanalytical Association.

Ana-Maria Rizzuto is a prolific author, theoretician, clinician, and psychoanalytic historian... She further distinguishes herself with Freud and the Spoken Word: Speech as the Key to the Unconscious... As a clinician, I see her work as excellent scholarship... Rizzuto's work makes a compelling argment for the irreducible foundational origins of our main, but not our only, tool. - David Goldenberg, JAPA