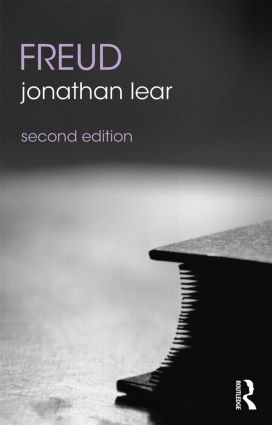 In this fully updated second edition, the author clearly introduces and assesses all of Freud's thought, focusing on those areas of philosophy on which Freud is acknowledged to have had a lasting impact. These include the philosophy of mind, free will and determinism, rationality, the nature of the self and subjectivity, and ethics and religion. He also considers some of the deeper issues and problems Freud engaged with, brilliantly illustrating their philosophical significance: human sexuality, the unconscious, dreams, and the theory of transference. The author's approach emphasizes the philosophical significance of Freud’s fundamental rule – to say whatever comes to mind without censorship or inhibition. This binds psychoanalysis to the philosophical exploration of self-consciousness and truthfulness, as well as opening new paths of inquiry for moral psychology and ethics.

The second edition includes a new Introduction and Conclusion. The text is revised throughout, including new sections on psychological structure and object relations and on Freud’s critique of religion and morality.

"Probably the best philosophical introduction into the central ideas and concepts of Freud’s theories and practice." - The Guardian

"Jonathan Lear is one of the most subtle and original thinkers in psychoanalysis. So a book by him simply called Freud should attract everyone is at all psychoanalytically minded. They will not be disappointed. This is simply the best introduction to Freud I know." - Marcia Cavell, The International Journal of Psychoanalysis

"This book will be viewed by philosophers interested in psychoanalysis as a major contribution. It will also be read and intensively discussed by many professors of literature and of intellectual history who lecture on Freud."- Richard Rorty

"If I were to answer the question: who, among contemporary psychoanalysts, is best qualified to write an introduction to Freud as a philosopher, my choice would be: Jonathan Lear." - Slavoj Žižek, University of Ljubljana, Slovenia

"Lear does very well to explain a fundamental modification in Freud's clinical work…this is definitely worthwhile for anyone wanting a serious briefing on the undoubted accomplishment on classical Freudian psychoanalysis." -Joseph Schwartz, New Humanist

"This is a lucid exegesis of Freud's conception of the mind, and a satisfying demonstration of its enduring value. Freud's loudest detractors often seem simply incapable of understanding him; they will no longer have that excuse." - Mark Solms, University of Cape Town, South Africa, and International Neuro-Psychoanalysis Centre, London, UK

"First rate - Lear captures the wider philosophical importance of Freud: how he makes us rethink our conceptions of ourselves as human beings, and the implications of this for morality and religion. A superb volume, and a terrific addition to the series." - John Cottingham, University of Reading, UK

1. Interpreting the unconscious 2. Sex, Eros and life 3. The interpretation of dreams 4. Transference 5. Principles of mental functioning 6. The structure of the psyche and the birth of object-relations 7. Morality and religion Conclusion: Freud’s Legacy.

Jonathan Lear is the Roman Family Director of the Neubauer Collegium for Culture and Society at the University of Chicago, USA. He is also the John U. Nef Distinguished Service Professor in the Committee on Social Thought and the Department of Philosophy. He is a trained psychoanalyst, and the author of several acclaimed books on philosophy and psychoanalysis, including Aristotle: The Desire to Understand; Love and Its Place in Nature; Open Minded; Happiness, Death and the Remainder of Life and Radical Hope: Ethics in the Face of Cultural Devastation. His most recent book is A Case for Irony (2011). He is a recipient of the Andrew W. Mellon Foundation Distinguished Achievement Award.

is a major series of introductions to the great Western philosophers. Each book places a major philosopher or thinker in historical context, explains and assesses their key arguments, and considers their legacy. Additional features include a chronology of major dates and events, chapter summaries, annotated suggestions for further reading and a glossary of technical terms.

An ideal starting point for those new to philosophy, they are also essential reading for those interested in the subject at any level.