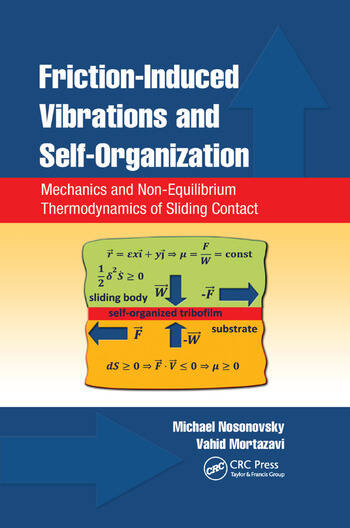 Many scientists and engineers do not realize that, under certain conditions, friction can lead to the formation of new structures at the interface, including in situ tribofilms and various patterns. In turn, these structures—usually formed by destabilization of the stationary sliding regime—can lead to the reduction of friction and wear. Friction-Induced Vibrations and Self-Organization: Mechanics and Non-Equilibrium Thermodynamics of Sliding Contact combines the mechanical and thermodynamic methods in tribology, thus extending the field of mechanical friction-induced vibrations to non-mechanical instabilities and self-organization processes at the frictional interface. The book also relates friction-induced self-organization to novel biomimetic materials, such as self-lubricating, self-cleaning, and self-healing materials.

The book begins with an exploration of friction as a fundamental force of nature throughout the history of science. It then introduces general concepts related to vibrations, instabilities, and self-organization in the bulk of materials and at the interface. After presenting the principles of non-equilibrium thermodynamics as they apply to the interface, the book formulates the laws of friction and highlights important implications. The authors also analyze wear and lubrication. They then turn their attention to various types of friction-induced vibration, and practical situations and applications where these vibrations are important. The final chapters consider various types of friction-induced self-organization and how these effects can be used for novel self-lubricating, self-cleaning, and self-healing materials.

From Frictional Instabilities to Friction-Induced Self-Organization

Drawing on the authors’ original research, this book presents a new, twenty-first century perspective on friction and tribology. It shows how friction-induced instabilities and vibrations can lead to self-organized structures, and how understanding the structure–property relationships that lead to self-organization is key to designing "smart" biomimetic materials.

Vibrations and Stability at the Bulk and at the Interface
Linear Vibrations in Systems with Single, Multiple, and Infinite Number of Degrees of Freedom
Stability Analysis
Non-Linear Vibration and Stability Analysis
Bifurcations, Catastrophes, and Chaos
Multi-Scale Systems
Self-Organization: Different Types
Example: Benard Cells
Self-Organization in Tribology
Asymptotic Transition from a 3D (Bulk) to a 2D (Interface) System
Summary
References

Michael Nosonovsky is an assistant professor at the University of Wisconsin-Milwaukee. He received his M.Sc. from St. Petersburg Polytechnic University, Russia, and his Ph.D. in mechanical engineering from Northeastern University, Boston. He has also worked at Ohio State University and the National Institute of Standards and Technology. Michael’s interests include biomimetic surfaces, capillary effects, nanotribology, and friction-induced self-organization.

Vahid Mortazavi is a doctoral student at the University of Wisconsin-Milwaukee. He received his M.Sc. from Tarbiat Modares University in Tehran, Iran. Vahid’s research interests include friction, tribology, and heat transfer.

"The approach when friction is treated as a fundamental force of nature is definitely novel and very general. The relationship between friction-induced instabilities and friction-induced self-organization discussed in the book is an important topic ... . Much progress has been achieved in the field in the last decade and the book, reviewing the state of the art in the field, will be useful for a broad range of experts in the field of tribology. I also should emphasize the detailed treatment of self-healing materials in the book in the context of tribology, which is one of the hottest topics in the modern material science."
—Edward Bormashenko, Ariel University, Israel

"The book by Nosonovsky and Mortazavi presents a novel and intriguing approach to the studies of friction. The authors start with basic principles of non-linear dynamics and self-organization and apply them for analysis of friction in a daring attempt to deduce this phenomenon from general thermodynamics of non-equilibrium states. The authors succeeded to achieve clear and deep theory that, in particular, provides an interpretation of the events observed in recent experiments and explains a wide class of effects induced by friction."
—Eugene Kagan, The Weizmann Institute of Science, Israel