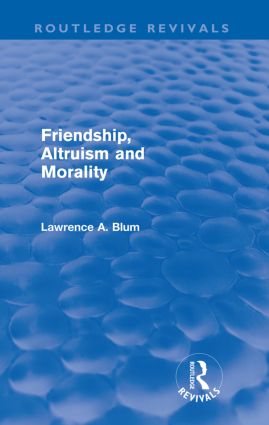 By Laurence A. Blum

Friendship, Altruism, and Morality, originally published in 1980, gives an account of "altruistic emotions" (compassion, sympathy, concern) and friendship that brings out their moral value. Blum argues that moral theories centered on rationality, universal principle, obligation, and impersonality cannot capture this moral importance. This was one of the first books in contemporary moral philosophy to emphasize the moral significance of emotions, to deal with friendship as a moral phenomenon, and to challenge the rationalism of standard interpretations of Kant, although Blum’s "sentimentalism" owes more to Schopenhauer than to Hume. It was a forerunner to care ethics, and feminist ethics more generally; to virtue ethics; and to subsequent influential interpretations of Kant that attempted to room for altruistic emotion and friendship, and other forms of particularism and partialism. In addition, the work has been widely influential in religious studies, political theory, bioethics, and feminist ethics.

'It must be a rare honour for a new book in philosophy to be noticed in the news pages of The Sunday Times; Professor Blum’s book was hailed there, as marking a revolution in moral philosophy, shortly after its publication; and while it is, I think, rather less revolutionary than The Sunday Times believed, or than its author sometimes suggests, it deserves to be warmly welcomed and widely read.

The detailed argument of the book is impressive and interesting, and ought to persuade anyone who still needs persuading of the inadequacy of a strictly Kantian account …of morality as such. Blum shows himself to be more sensitive than many to the complex and varied realities of moral life and thought, and to the richness and subtlety of our moral concepts: for his aim is not to replace the Kantian account with an alternative general account of the essential and universal features of morality, but rather to exhibit the irreducible variety of moral thought and motivation.' - Philosphical Quarterly