From Atoms to Galaxies
A Conceptual Physics Approach to Scientific Awareness 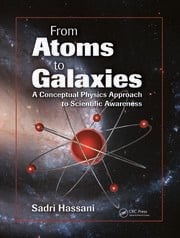 From Atoms to Galaxies: A Conceptual Physics Approach to Scientific Awareness

From Atoms to Galaxies: A Conceptual Physics Approach to Scientific Awareness teaches heightened scientific acuity as it educates students about the physical world and gives them answers to questions large and small. Written by Sadri Hassani, the author of several mathematical physics textbooks, this work covers the essentials of modern physics, in a way that is as thorough as it is compelling and accessible.

Some of you might want to know …
. . . How did Galileo come to think about the first law of motion?
. . . Did Newton actually discover gravity by way of an apple and an accident?
Or maybe you have mulled over…
. . . Is it possible for Santa Claus to deliver all his toys?
. . . Is it possible to prove that Elvis does not visit Graceland every midnight?
Or perhaps you’ve even wondered …
. . . If ancient Taoism really parallels modern physics?
. . . If psychoanalysis can actually be called a science?
. . . How it is that some philosophies of science may imply that a 650-year-old woman can give birth to a child?

No Advanced Mathematics Required
A primary textbook for undergraduate students not majoring in physics, From Atoms to Galaxies examines physical laws and their consequences from a conceptual perspective that requires no advanced mathematics. It explains quantum physics, relativity, nuclear and particle physics, gauge theory, quantum field theory, quarks and leptons, and cosmology. Encouraging students to subscribe to proven causation rather than dramatic speculation, the book:

Based on courses taught by the author for over 15 years, this textbook has been developed to raise the scientific awareness of the untrained reader who lacks a technical or mathematical background. To accomplish this, the book lays the foundation of the laws that govern our universe in a nontechnical way, emphasizing topics that excite the mind, namely those taken from modern physics, and exposing the abuses made of them by the New Age gurus and other mystagogues. It outlines the methods developed by physicists for the scientific investigation of nature, and contrasts them with those developed by the outsiders who claim to be the owners of scientific methodology. Each chapter includes essays, which use the material developed in that chapter to debunk misconceptions, clarify the nature of science, and explore the history of physics as it relates to the development of ideas. Noting the damage incurred by confusing science and technology, the book strives to help the reader to emphatically demarcate the two, while clearly demonstrating that science is the only element capable of advancing technology.

Science Rekindles
Renaissance and the Copernican Revolution
New Observations: 15 Centuries After Ptolemy
The Fall of the Spherical Dynasty
End-of-Chapter Material

… present[s] some of the most striking ideas behind physics but also give[s] students and the general public the opportunity of reflecting on the implications of these ideas and provide them with the tools to draw a distinction between scientific fact and nonsense. The book does indeed do what it says on the cover; it presents topics ranging from early Greek astronomy and Newtonian dynamics, passing by electromagnetism and thermodynamics and culminating with quantum theory, relativity and cosmology. … the CD included with the book has lengthier mathematical and numerical examples that supplement the textbook. … The book can be used as an introductory textbook which can work at different levels. I found that the ‘Food For Thought’ sections in the book can be successfully used with students to discuss the topics presented, and the margin annotations that appear all over the book are very helpful. At the end of each chapter there are answers to questions, a glossary, review questions as well as conceptual and numerical exercises. This should provide enough material for teachers or lecturers, both in science and humanities, to narrow the gap between the two cultures.
—Contemporary Physics, Volume 52, Issue 3, 2011

Intellectually inspirational, comprehensively informational and tangibly consistent in title, substance and organization respectively. … The most distinguishing feature of this unique title is its originality in terms of addressing the scientific phenomena with pragmatic rigor and spirited vigour. … the book demonstratively stands out as one of the most friendly guides for recognising many interconnected strands of natural philosophy which help us understand science in general and physics in particular. … Last but not least, especially for students and instructors, like any other standard textbook the title throughout provides study help by writing and explaining formulas along with explanatory line-drawn figures, other exhibits, conceptual exercises, mathematical notes, numerical and other examples, glossaries, and review questions. … this title is recommended … [for] personal ownership and placement of multiple copies in the libraries respectively.
—Zia Khan, Reviews, Volume 11, Issue 2, 2010

I have been teaching introductory physics for non-science majors for a long time and have never been satisfied with the books on the market. Most of these texts are just watered-down versions of the general physics texts for science students. When I read through [these] three books, I really do get a sense that the authors have attempted to create book[s] that [are] somehow different from the normal algebra problem-based texts. I will be using Questioning the Universe: Concepts in Physics this fall for the science portion of a Science Fiction Learning Community. In the spring, I will be teaching a physics/art history hybrid course and will be using either Superstrings and Other Things: A Guide to Physics, Second Edition or From Atoms to Galaxies: A Conceptual Physics Approach to Scientific Awareness. … both are great books. … I really feel that for conceptual physics courses, CRC Press currently has the three strongest titles. I anticipate a fun teaching experience while using these texts and hope to use them again in the future.
—Steve Zides, Wofford College, Spartanburg, South Carolina, USA