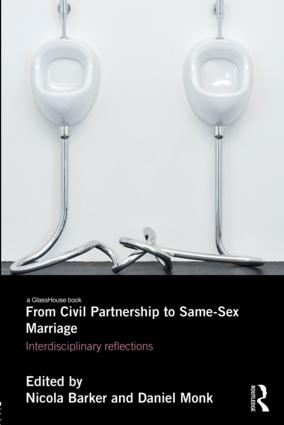 From Civil Partnership to Same-Sex Marriage

The Civil Partnership Act 2004 and the Marriage (Same Sex Couples) Act 2013 are important legal, social and historical landmarks, rich in symbolic, material and cultural meanings. While fiercely opposed by many, within mainstream narratives they are often represented as a victory in a legal reform process that commenced with the decriminalisation of homosexuality. Yet, at the same time, for others they represent a problematic and ambivalent political engagement with the institution of marriage. Consequently, understood or labelled as ‘revolutionary’, ‘progressive’ and ‘conservative’, these legal reforms provide a space for thinking about issues that arguably affect everyone, regardless of sexual orientation or relationship status.

This edited collection brings together scholars and commentators from a range of backgrounds, generations and disciplines to reflect on the first ten years of civil partnerships and the introduction of same-sex marriage. Rather than rehearsing the arguments ‘for’ and ‘against’ relationship recognition, the essays ask original questions, draw on a variety of methods and collectively provide a detailed and reflective ‘snap shot’ of a critical moment, a ‘history of the present’ as well as providing a foundation for innovative ways of thinking about and engaging with the possibilities and experiences arising from the new reality of relationship recognition for gays and lesbians.