From Classical to Contemporary Psychoanalysis
A Critique and Integration 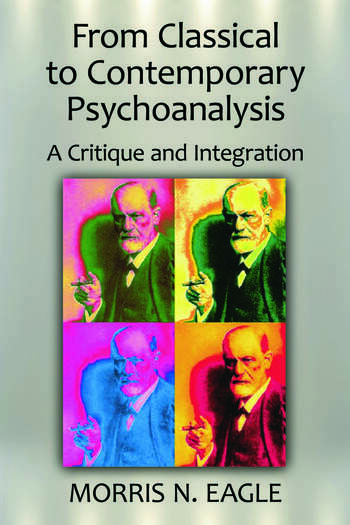 From Classical to Contemporary Psychoanalysis: A Critique and Integration

The landscape of psychoanalysis has changed, at times dramatically, in the hundred or so years since Freud first began to think and write about it. Freudian theory and concepts have risen, fallen, evolved, mutated, and otherwise reworked themselves in the hands and minds of analysts the world over, leaving us with a theoretically pluralistic (yet threateningly multifarious) diffusion of psychoanalytic viewpoints.

To help make sense of it all, Morris Eagle sets out to critically reevaluate fundamental psychoanalytic concepts of theory and practice in a topical manner. Beginning at the beginning, he reintroduces Freud's ideas in chapters on the mind, object relations, psychopathology, and treatment; he then approaches the same topics in terms of more contemporary psychoanalytic schools. In each chapter, however, there is an underlying emphasis on identification and integration of converging themes, which is reemphasized in the final chapter. Relevant empirical research findings are used throughout, thus basic concepts - such as repression - are reexamined in the light of more contemporary developments.

Morris Eagle, Ph.D., ABPP, FRSC, is Professor Emeritus at the Derner Institute of Advanced Psychological Studies, Adelphi University, and is currently Distinguished Educator in Residence at California Lutheran University. He is on the faculty of the New York University Psychoanalytic Institute and the New Center for Psychoanalysis (NCP) in Los Angeles. He has received numerous awards, has presented widely, and is the author of over 150 articles and book chapters as well as 4 books.

"As this superb text moves the reader from classical to contemporary psychoanalysis, Eagle's scholarly voice displays his mastery of the history of psychoanalysis. It is a real tour d'horizon for the education of students and teachers alike. This book fulfills the task of true enlightenment about the psychoanalytic intellectual and emotional adventure." - Professor Dr. Horst Kächele, International Psychoanalytic University, Berlin

"Eagle's book is a masterpiece of conceptual integration. It is simply the best guide to the development of modern psychoanalytic thinking available to students and practitioners. Its measured criticism of classical and novel approaches provides a description of the evolution of Freud's science that is in places challenging, in all respects balanced, and ultimately highly entertaining. He presents a majestic, grand perspective with a remarkable feat of revelatory scholarship." - Peter Fonagy, Freud Memorial Professor, University College London, UK

"This is a long-needed book. It does not present a new approach or 'school' - we have too many books like that already. This is much more ambitious: It presents an overview of Freudian theory vis-à-vis the major schools of contemporary psychoanalysis. For example, four chapters are on contemporary conceptions of mind, object relations, psychopathology, and treatment. Divergences and convergences are discussed in depth, with the clarity of thinking that always characterizes Morris Eagle's writings. His previous book, Recent Developments in Psychoanalysis (1984), became a classic, was translated in several languages, and was used as a textbook in many university courses and training programs. I have no doubt that this new book will also be a point of reference for the entire psychoanalytic community." - Paolo Migone, Editor, Psicoterapia e Scienze Umane

"Freudian theory, metaphorically, comprises an exceptionally complex, libido-filled hydraulic system which was detailed in his 23-volume oeuvre. Morris, the master "plumber" extraordinaire, demonstrates a unique talent for presenting a remarkably lucid, largely jargon-free, comprehensive, sympathetic delineation of this system in approximately 100 pages - a stunning tour-de-force! The bulk of this book presents a penetrating, objective examination of how contemporary psychoanalytic theories diverge and converge with classical psychoanalytic theory in conceptions of mind, object relations, psychopathology, and treatment. He then focuses on and explicates the convergence on the importance of the capacity for reflection on the other's mental state, which he integrates with the classical emphasis on self-reflection. All interested in psychoanalysis, on the spectrum of undergraduates to senior analysts, will gain insight and understanding from the scope and perspicacity of this remarkable work." - Joseph Schachter, Columbia University Psychoanalytic Center for Training and Research, USA

"Over the years I have come to expect nothing less than brilliantly perceptive and scholarly contributions from Morris Eagle, and this book does not disappoint. As a relationalist, there are points with which I might take issue, but not at all at issue is that the book is essential reading for anyone who wishes to understand deeply the ferment within psychoanalysis and the theoretical options that reside within its borders." - Paul Wachtel, Distinguished Professor of Psychology, CUNY

"...captivating and accessible... this work shines a clear and sharp light on the elemental convergences and differences between classical and contemporary psychoanalytic theory and invites the reader to clarify his or her own relationships to recent developments...The section on Freudian theory is invigorating in its clarity. Old, well-worn concepts become alive with the clear air that Eagle brings to his task, enabling the reader to breathe and think along with him... [This] book yielded so much clarity about the sifting and sorting that has gone on in psychoanalytic thinking and research since Freud. Get it. Read it." - Terri Broll, New Therapist

"Eagle has provided a remarkably lucid appraisal of the "relational turn" in psychoanalysis...a veritable tour de force in its capacity to grab hold of a mass of sprawling, unruly theories, clinical data, and related research, and shape them into an easily digestible, overarching view of the current state of psychoanalysis. In an age where psychoanalysis has too often become the repository of  vague, overlapping, even contradictory constructs, incoherent theories, and partisan slogans, Eagle' book provides a sharp appraisal of ideas, a critical eye for the chaff in our thinking, and the ability to make connections that weave a more sturdy garment from what is good and valuable in diverse psychoanalytic theories." - Anne Erreich, PhD., Psychoanalytic Psychology

"A masterful summation of Freudian concepts, clearly and succinctly presented. This book is a valuable compendium to any reading of Freud, as Eagle discerns the warp and weave of Freud's thinking and brings a conceptual clarity while not overlooking the knotty problems that arise theoretically and clinically in applying Freud's ideas...It is a pleasure to read Eagle's observations." - William A. MacGillivray, Division/REVIEW

"From Classical to Contemporary Psychoanalysis is really several texts combined into a single volume: a comprehensive account of Freudian metapsychology and clinical practice, an overview and critique of psychoanalytic thought within the context of historical and intellectual milieu relevant to each theory, and a thorough critiqu of each theory. Either one taken on its own would be worth the price of this book...It is eleganly argued, intricately researched, well organized, and uncompromising in its analysis. It is a challenging read, but, in this case, the rewards are well worth the effort." - James M. Hepburn, PsycCRITIQUES

"For an eager reader of many papers and books that promise to present a new view on old issues, this text by Morris Eagle stands out for many good reasons... being critical in both directions and at the same time it is a convincing effort at reconciliation. Careful reading, sifting through foundational texts, allows for an integrative view, which often is backed by references to basic research as arbiter. The ensuing discussions of the conceptions of psychopathology, and last but not the least, on implications for treatment, masterly pursue the same task." -Horst Kachele, M.D., Ph. D., International Psychoanalytic University, Germany, American Journal of Psychoanalysis, 2014