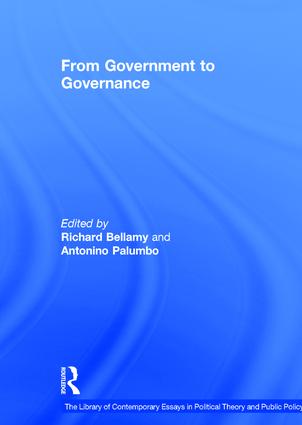 From Government to Governance

Neoliberal reforms and globalization have deeply transformed the state and set in motion a momentous shift from 'government' to 'governance'. Governance entails a move away from traditional hierarchical forms of organization and the adoption of network forms. It also entails a revision of the relationship between state and civil society in a more participatory direction. Governance is finally said to be responsible for shifting the emphasis away from statute law to more flexible forms of regulation and implementation. The state is thus claimed to be superseded by a 'networked polity' where authority is devolved to task-specific institutions with unlimited jurisdictions and intersecting memberships operating at sub- and supra-national level. This volume brings together a representative sample of the key articles that established governance as a major field of research and helped clarify the main critical issues to be addressed by those involved in research and teaching in this area.

’In this excellent collection of existing research papers, two eminent and well qualified editors thematically draw together 20 very separate, though nevertheless, authoritative pieces aimed at enabling current researchers to reflect and consolidate their understandings of political theory and public policy. The publication is aimed at other academics, and Professional and Masters’ students, and will be of immense use to such a wide readership.’ Public Administration