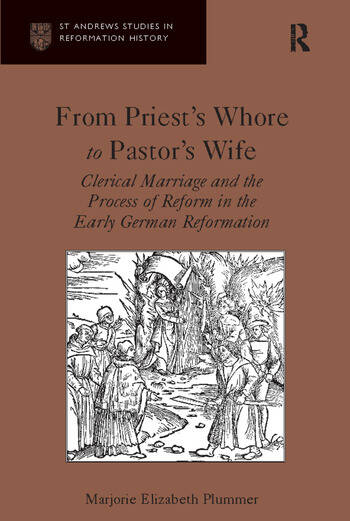 From Priest's Whore to Pastor's Wife: Clerical Marriage and the Process of Reform in the Early German Reformation

On 13 June 1525, Martin Luther married Katharina von Bora, a former nun, in a private ceremony officiated by city preacher Johann Bugenhagen. Whilst Luther was not the first former monk or Reformer to marry, his marriage immediately became one of the iconic episodes of the Protestant Reformation. From that point on, the marital status of clergy would be a pivotal dividing line between the Catholic and Protestant churches. Tackling the early stages of this divide, this book provides a fresh assessment of clerical marriage in the first half of the sixteenth century, when the debates were undecided and the intellectual and institutional situation remained fluid and changeable. It investigates the way that clerical marriage was received, and viewed in the dioceses of Mainz and Magdeburg under Archbishop Albrecht of Brandenburg from 1513 to 1545. By concentrating on a cross-section of rural and urban settings from three key regions within this territory - Saxony, Franconia, and Swabia - the study is able to present a broad comparison of reactions to this contentious issue. Although the marital status of the clergy remains perhaps the most identifiable difference between Protestant and Roman Catholic churches, remarkably little research has been done on how the shift from a "celibate" to a married clergy took place during the Reformation in Germany or what reactions such a move elicited. As such, this book will be welcomed by all those wishing to gain greater insight, not only into the theological debates, but also into the interactions between social identity, governance, and religious practice.

"Marjorie Elizabeth Plummer has written a fascinating, richly documented, and methodologically innovative book on clerical marriage in the first decades of the Reformation."

"Anyone interested in the effects of the Reformation on the clergy anywhere in Europe should read this book and will find it stimulating. It has certainly helped me to think in new ways about clerical marriage in England. This is the one-hundredth volume of the St. Andrews Studies in Reformation History, and it is fitting that the series should mark this milestone with such a superb contribution to Reformation studies. This must-read work deserves to be one of their most successful titles for decades to come."

"In this excellent study, Marjorie Elizabeth Plummer investigates a broad swath of Germany stretching from Swabia through Franconia to Saxony… As other new studies have also emphasized, the Reformation was a process, not an event. From Priest’s Whore to Pastor’s Wife makes very clear why marriage was at the heart of this process."

'The strength of the book is that by returning the theological debate over clerical marriage to its social and cultural context, Plummer has significantly deepened our understanding of both its origins and impact."

"Ultimately … [Plummer] has produced a strong regional study that fits well into the current historiography, especially the debates surrounding social control, gender, and popular culture. Refreshingly, it serves to increase focus on the practicalities and realities of clerical marriage, which, as Plummer shows, did not always have the desired results at the local level."

'The scope of her analysis is impressive; the debates of the Reformation are set against the backdrop of earlier controversy and attempts at regulation, individual case studies are located within the experience of some 2,500 Lutheran pastors, attitudes to clerical marriage and clerical concubinage are explored side by side, and the experience of former monastic clergy receives thoughtful analysis. Clerical marriage, as Plummer contends, may provide a useful lens through which to view the process of reform in practice, but, as this volume shows, it is a subject that also warrants a thoughtful analysis in its own right."

"Plummer's contribution combines an astounding volume of archival research with a critical re-examination of published materials into a nuanced explication of the social process of reform in actual practice, leaving few stones unturned. Her book... is history at its best."