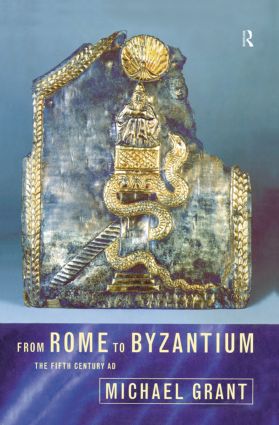 From Rome to Byzantium

Byzantium was dismissed by Gibbon, in the Decline and Fall of the Roman Empire,and his Victorian successors as a decadent, dark, oriental culture, given up to intrigue, forbidden pleasure and refined cruelty. This great empire, founded by Constantine as the seat of power in the East began to flourish in the fifth century AD, after the fall of Rome, yet its culture and history have been neglected by scholars in comparison to the privileging of interest in the Western and Roman Empire. Michael Grant's latest book aims to compensate for that neglect and to provide an insight into the nature of the Byzantine Empire in the fifth century; the prevalence of Christianity, the enormity and strangeness of the landscape of Asia Minor; and the history of invasion prior to the genesis of the empire.

Michael Grant's narrative is lucid and colourful as always, lavishly illustrated with photographs and maps. He successfully provides an examination of a comparatively unexplored area and constructs the history of an empire which rivals the former richness and diversity of a now fallen Rome.

'This is a paella of a book: tasty bits for those who know what they want.' - Spectator

'Impressively erudite and characteristically well researched, and provides a fresh perspective on a century that was truly the best and worse of times.' - Kirkus Reviews

'This provides a fine, accessible history of the period, including photos and maps as it examines and reconstructs the Byzantine Empire's history. College-level students will find it an appealing study.' - The Bookwatch

'The general student and specialist can read From Rome to Byzantium with interest and profit.' - Speculum-A Journal of Medieval Studies