From Selma to Montgomery
The Long March to Freedom 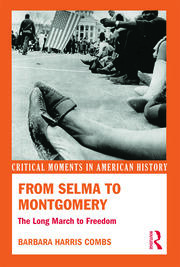 From Selma to Montgomery: The Long March to Freedom

On March 7, 1965, a peaceful voting rights demonstration in Selma, Alabama, was met with an unprovoked attack of shocking violence that riveted the attention of the nation. In the days and weeks following "Bloody Sunday," the demonstrators would not be deterred, and thousands of others joined their cause, culminating in the successful march from Selma to Montgomery. The protest marches led directly to the passage of the Voting Rights Act of 1965, a major piece of legislation, which, ninety-five years after the passage of the Fifteenth Amendment, made the practice of the right to vote available to all Americans, irrespective of race. From Selma to Montgomery chronicles the marches, placing them in the context of the long Civil Rights Movement, and considers the legacy of the Act, drawing parallels with contemporary issues of enfranchisement.

In five concise chapters bolstered by primary documents including civil rights legislation, speeches, and news coverage, Combs introduces the Civil Rights Movement to undergraduates through the courageous actions of the freedom marchers.

Barbara Harris Combs is Assistant Professor of Sociology and Southern Studies at the University of Mississippi.

"With admirable insight, Barbara Combs nicely frames and examines the great significance of the Selma campaign. She not only places this high point of the Civil Rights Movement into an historical context but equips us to understand the ripple effects of this ‘moment in time,’ especially as relevant to the quality of contemporary American citizenship and the franchise."

"[Barbara Combs] focuses attention on the movement’s lesser known local activists, which rightfully de-centers national figures such as Martin Luther King, Jr., in the movement’s narrative. Moreover, linking the Selma-to-Montgomery March and the 1965 Voting Rights Act to contemporary discussions of the Voting Rights Act’s legacies is a timely and important scholarly intervention."

"Barbara Harris Combs offers a complex and nuanced approach to the study of the 1965 march to Montgomery, Alabama, in the context of black Americans’ freedom struggles. From Selma to Montgomery is a wonderfully crafted tool for both history and sociology undergraduate classrooms, and a scaffold from which to teach interdisciplinary methodology, thinking, and questioning.”