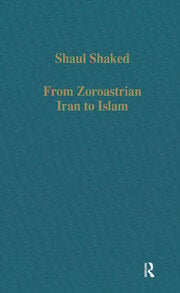 From Zoroastrian Iran to Islam: Studies in Religious History and Intercultural Contacts

The book deals with some major aspects of Zoroastrianism in Iran during the Sasanian period, including the important distinctions between the spritual and the material modes of existence, the idea that Ahreman, the Evil Spirit, does not belong in the material world, and the widely current myth of Zurvan. The volume also deals with the impact of some Zoroastrian themes on Islam, such as the twin relationship between state and religion, throwing light on both the Iranian themes and their borrowing into Islamic literature.

Contents: Preface; Esoteric trends in Zoroastrianism; The notions menog and getig in the Pahlavi texts and their relation to eschatology; Some notes on Ahreman, the Evil Spirit, and his creation; Mihr the judge; The myth of Zurvan: cosmogony and eschatology; From Iran to Islam: notes on some themes in transmission: 1. ’Religion and sovereignty are twins’ in Ibn al-Muqaffa’s theory of government. 2. The four sages; From Iran to Islam: on some symbols of royalty; Payman: an Iranian idea in contact with Greek thought and Islam; A facetious recipe and the two wisdoms: Iranian themes in Muslim garb; First man, first king: notes on Semitic-Iranian syncretism and Iranian mythological transformations; ’For the sake of the soul’: a Zoroastrian idea in transmission into Islam; Some Iranian themes in Islamic literature; Addenda; Index.

’Shaked is an excellent historian of religion, and the 12 articles reproduced here are of impeccable quality.’ Bulletin of the Middle East Studies Association '[T]his collection can be consulted with profit and with stimulus to the mind by both historians of religion and students of cultural cross-currents.' Journal of Semitic Studies