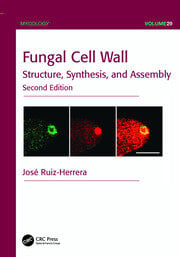 Fungal Cell Wall: Structure, Synthesis, and Assembly, Second Edition is a compendium of information on the chemical structure, synthesis, and organization of the cell wall of fungi. Reviewing the past 20 years of research in the field, it discusses experimental evidence that demonstrates the role of the cell wall in the growth, development, morphogenesis, and evolution of fungi.

More than just a revision, this second edition offers a fresh perspective on what is currently known about the fungal cell wall. It covers recent developments, conflicting theories, and important aspects that are largely forgotten—including critical analysis of the prevalent idea that cell walls from all fungal species have the same basic structure, organization, and behavior as the most popular models of study.

Chapters are self-contained and can be read independently, allowing readers to delve into specific topics. The book begins by examining the chemical composition and structure of the fungal cell wall, an area almost closed to modern research. It then describes the structure and synthesis of the most important components of the cell wall and analyzes the mechanisms of cell wall expansion and growth. Throughout, the book identifies the basic concepts that have led to modern ideas about cell walls.

The Essential Guide to the Fungal Cell Wall

A critical review of fungal cell wall research, this book helps readers understand the role of fungi in nature—both positive and negative—from their symbiotic associations and biotechnological applications to their pathogenicity to plants, animals, and humans.

Structure of the fungal cell wall

Chapters include an Introduction and References.

José Ruiz-Herrera, Ph.D., is Professor Emeritus in the Department of Genetic Engineering at the Center for Research and Advanced Studies of the National Polytechnic Institute, Mexico (Irapuato Unit). He has been the recipient of important awards, among which the following may be cited: Award of the Academy of Scientific Research, Mexico; Miguel Hidalgo y Costilla Award from the Congress of the State of Guanajuato, Mexico; Elsevier/Scopus/Science and Technology Council of the State of Guanajuato Award; the Ruth Allen Award of the American Phytopathological Society; and the National Award in Sciences from the Mexican Government. He is a member of several scientific societies, having served as president of the Mexican Society for Microbiology and the Mexican Society for Biochemistry, and has served on many scientific committees. He is a reviewer for several prestigious journals and serves or has served as associate editor for some of them. Dr. Ruiz-Herrera has published more than 220 articles in international journals and presented over 230 lectures.