GIS-based Studies in the Humanities and Social Sciences 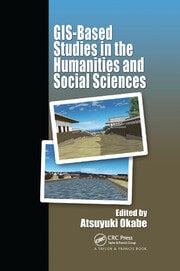 GIS-based Studies in the Humanities and Social Sciences

Studies in the humanities and the social sciences can be enhanced through the use of geographic information systems (GIS). However, this computer-aided method of analysis is worthless unless researchers can devote the time necessary to learn what it is, what it can do, and how to use it.

Through the use of this book, readers can understand how GIS technology can be utilized in advancing studies. This volume will also encourage professionals in humanities and the social sciences to employ new GIS-based methods in their own research.

Introduction. A tool for creating pseudo-3D spaces with hyperphoto: An application in ethnographic studies. A laser-scanner system for acquiring archeological data: Case of the tyre remains. A laser-scanner system for acquiring walking-trajectory data and its possible application to behavioral science. A method for constructing a historical population-grid database from old maps and its applications. Urban employment areas: Defining Japanese metropolitan areas and constructing the statistical database for them. Data modelling of archaeological sites using a unified modelling language. How to find free software packages for spatial analysis via the Internet. A toolbox for examining the effect of infrastructural features on the distribution of spatial events. A toolbox for spatial analysis on a network. Estimation of routes and building sites described in premodern travel accounts through spatial reasoning. Computer-simulated settlements in West Wakasa: Identifying the ancient tax regions - The go-ri system. Site-catchment analysis of prehistoric settlements by reconstructing paleoenvironments with GIS. Migration, regional diversity, and residential development on the edge of greater Cairo - linking three kinds of data - census, household-survey data, and geographical data - with GIS. Effect of environmental factors on housing prices: Application of GIS to urban-policy analysis. Estimating urban agglomeration economies for Japanese metropolitan areas: Is Tokyo too large? Evaluation of school redistricting by the school family system. A method for visualizing the landscape of old-time cities using GIS. Visualization for site assessment. Visualization of the Mental Image of a city using GIS.