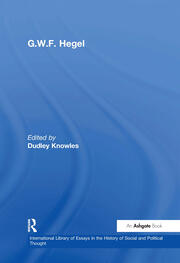 Hegel is notable for his distinctive contribution to the perennial concerns of political philosophy. He outlines a powerful account of freedom as both a personal and social achievement, discussing theories of personal rights, private property and punishment. He articulates a social analysis of human action and criticizes Kantian ethics. His theory of self-actualization locates our social identities within 'Ethical Life' - the institutions of family life, civil society and the state - expressing a unique variety of rationalist conservatism. In this volume some of the finest interpreters of Hegel writing in English explore this distinguished heritage and explain its contemporary relevance.

Contents: Introduction; Part I The Distinctive Character of Hegel's Approach to Political Philosophy: Hegel's Dopplesatz: a neutral reading, Robert Stern; Freedom and social categories in Hegel's ethics, Terry Pinkard; Hegel and institutional rationality, Robert B. Pippin; The project of reconciliation: Hegel's social philosophy, Michael O. Hardimon. Part II Hegel on Will and Abstract Right: The unity of theoretical and practical spirit in Hegel's concept of freedom, Stephen Houlgate; Hegel on slavery and domination, Steven B. Smith; What is the question for which Hegel's Theory of Recognition is the answer?, Robert B. Pippin; Hegel's justification of private property, Alan Patten; Hegel's analysis of property in the Philosophy of Right, Peter G. Stillman; Annulment retributivism: a Hegelian theory of punishment, Jami L. Anderson; Hegel on the justification of punishment, Dudley Knowles. Part III Hegel's Philosophy of Action and Criticism of Kant: The emptiness of the moral will, Allen W. Wood; Kant, Hegel and determining our duties, Kenneth R. Westphal; Hegel's theory of moral action, its place in his system and the 'highest' right of the subject, David Rose; Ethical life and the demands of conscience, Frederick Neuhouser. Part IV Ethical Life: Family, Civil Society and the State: Spirit's phoenix and history's owl or the incoherence of dialectics in Hegel's account of women, Benjamin R. Barber; Community and indigence: a Hegelian perspective on aid to the poor, Alexander Kaufman; Hegel and liberalism, Paul Franco; Hegel on political sentiment, Joseph J. O'Malley; Hegel's political anti-cosmopolitanism: on the limits of modern political communities, James Bohman; Name index.

Dudley Knowles is a Professor in the Department of Philosophy at the University of Glasgow, UK