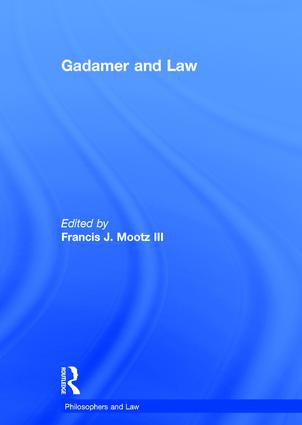 Hans-Georg Gadamer’s philosophical hermeneutics is especially relevant for law, which is grounded in the interpretation of authoritative texts from the past to resolve present-day disputes. In this collection, leading scholars consider the importance of Gadamer’s philosophy for ongoing disputes in legal theory. The work of prominent philosophers, including Fred Dallmayr, P. Christopher Smith and David Hoy, is joined with the work of leading legal theorists, such as William Eskridge, Lawrence Solum and Dennis Patterson, to provide an overview of the connections between law and Gadamer’s hermeneutical philosophy. Part I considers the relevance of Gadamer’s philosophy to longstanding disputes in legal theory such as the debate over originalism, the rule of law and proper modes of statutory and constitutional exegesis. Part II demonstrates Gadamer’s significance for legal theory by comparing his approach to the work of Nietzsche, Habermas and Dworkin.