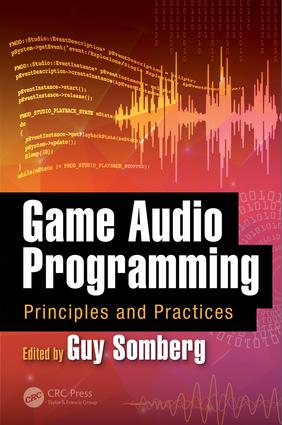 One of the goals of this book is to raise the general level of game audio programming expertise, so it is written in a manner that is accessible to beginners, while still providing valuable content for more advanced game audio programmers. Each chapter contains techniques that the authors have used in shipping games, with plenty of code examples and diagrams. There are chapters on the fundamentals of audio representation and perception; advanced usage of several different audio middleware platforms (Audiokinetic Wwise, CRI ADX2, and FMOD Studio); advanced topics including Open Sound Control, Vector-Based Amplitude Panning, and Dynamic Game Data; and more!

Whether you’re an audio programmer looking for new techniques, an up-and-coming game developer looking for an area to focus on, or just the one who got saddled with the audio code, this book has something for you.

Guy Somberg has been programming audio engines for his entire career. From humble beginnings writing a low-level audio mixer for slot machines, he quickly transitioned to writing game audio engines for all manner of games. He has written audio engines that shipped AAA games like Hellgate: London, Bioshock 2, and The Sims 4, as well as smaller titles like Minion Master, Tales From the Borderlands, and Game of Thrones. Guy has also given several talks at the Game Developer Conference.

When he’s not programming or writing game audio programming books, he can be found at home reading, playing video games, and playing the flute.