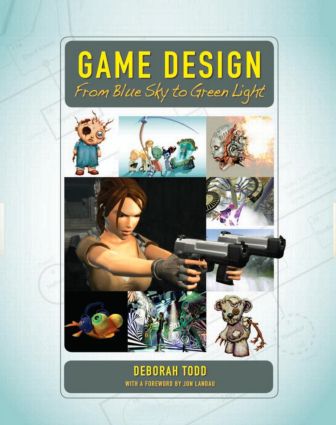 This book takes a real-world, in-depth journey through the game-design process, from the initial blue sky sessions to pitching for a green light. The author discusses the decision and brainstorming phase, character development and story wrap, creation of content and context outlines, flowcharting game play, and creating design documents. Special features include examples of both classic and contemporary games, and interviews with many of the game industry’s brightest professionals who share their insights on key elements in game design, and their analysis on what makes a game a blockbuster hit. This book is a perfect guide for the novice, student, and game enthusiast interested in learning the nuts and bolts of the computer-game industry.

" this first! If you want to break into the business, this book will help you shorten the long, hard road many of us have traveled."" -Christofer Sundberg, Avalanche Studios, Just Cause, Avalanche Studios, Just Cause, March 2007
pulled off a remarkable feat: she's produced a book that's both inspirational and practical. Listen to her and the other video game industry experts she interviews, and save yourself years of forehead-slapping."" -Corey Bridges, Multiverse, Multiverse, March 2007
Chapter 3: The Yin and Yang of Brainstorming

""Every good brainstorming session starts with a 15-minute discussion of Star Trek."" - Noah Falstein , quoting Ron Gilbert -Game Career Guide, February 2007
""Next-Gen.Biz Podcast Episode 22: Deborah Todd, author of the book Game Design: From Blue Sky to Green Light talks about the challenges of creating a game in today’s tough commercial environment."" -Next Gen Biz, March 2007
""Mary DeMarle is helping shape the script for Ubisoft's new Splinter Cell game. In an interview printed in new book Game Design by Deborah Todd, DeMarle has recounted the exact design process behind the latest game, explaining that the writer and development team are working very closely, with the design and screenwriting disciplines helping inform one another."" -Michael French, Develop, April 2007
""We've seen several books that promise to take you inside game design. A few of them have been excellent, but none are better than Deborah Todd's Game Design: From Blue Sky to Green Light. This book has the powerful ring of truth that can only come from experience (Todd's own, and that of the 30 expert game designers she interviews). Plus, it delivers the goods in well under 300 pages -- so you can devour it, learn from it, and still have time for an actual career. … Even if you’re already in the business, this stuff’s superb."" -Barnes & Noble, June 2007
""Interviews with top game producers supplement the author's position as an award-winning designer and writer, with exercises and a puzzles checklist at book's end for maximum learning and reinforcement. Any college-level collection strong on games development needs this."" -Midwest Book Review, June 2007
""One of the better books that's been published about some of the processes involved in game development…[with] pacy, intelligent writing and clean design… this provides a good overview of subjects such as design, story and characterisation."" -EDGE, May 2007
""Covers the creative aspects of game design… Students, you’ll get a pretty good overview by reading this book…Instructors, if you’re teaching a practical game design course…this book will cover you. Professionals, [it's] worth a read just to see what others have to say on the subject… You should read this just so you have some experience backing you up (even if it’s not your own)."" -teachingdesign.blogspot.org, September 2007
A K Peters is pleased to announce that Game Design has been selected as a finalist for the Game Developer Magazine's 2007 Front Line Awards, which anually recognize the year's best game-making tools in the categories of programming, art, audio, game engine, middleware, and books. Front Line award nominees represent the most innovative, user-friendly, and useful products from behind the scenes of the world's best video games. -Game Developer Magazine , November 2007
. . a remarkable insiders' look into the exploding, often chaotic world of video games, from blue sky to green light to the final boxed game on the shelf. Game Design is an invaluable resource for beginners and established pros alike!"" -Matt Costello, GXB Interactive, GXB Interactive, March 2007"