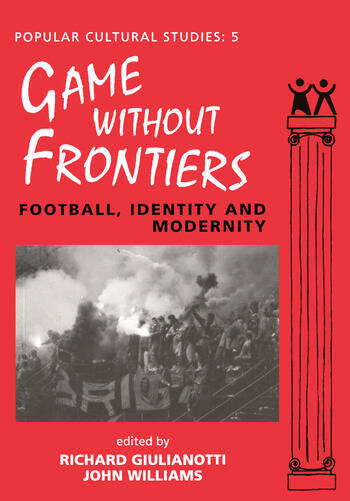 What is the historical appeal of football? How diverse are its players, supporters and institutions throughout the world? What are its various traditions and how are these affected by pressures to modernize? In what ways does the game help to reinforce or overcome social differences and prejudices? How can we understand football’s subcultures, especially football hooligan ones? The 1994 World Cup Finals in the United States have again demonstrated the conflicts which exist around football over its international future. The multi-media age beckons new audiences for top-level matches, but worries remain that the historical and cultural appeal of football itself may be the real loser. The global game has a breadth of skills, playing techniques, supporting styles and ruling bodies. These are all subject to local and national traditions of team play and fan display. Modern commercial influences and international cultural links through players and fan styles, are accommodated within the game to an increasing extent. Yet, football’s ability to differentiate remains: at local, regional, national and even continental levels. In some cases the game’s traditions ensure that these differences are becoming as oppositional today as is modern football hooliganism. But, the overall picture is one of a game without frontiers - rich in historical and cultural detail, pluralistic in its traditions and identities. This volume brings together essays by leading academics and researchers writing on world football. Their studies draw on interdisciplinary researches in England, Scotland, France, Italy, Germany, Austria, Argentina and Australia. The book will be of interest to students of sports science, cultural studies and social science and to all those who simply enjoy football as the world's greatest sporting passion.

Contents: Introduction: Stillborn in the USA?. Tradition and Modernity in European Football: Exporting football: notes on the development of Football in Europe; Austrification as modernisation: changes in Viennese football culture; We are Celtic supporters...: questions of football and identity in modern Scotland; From Saint-Etienne To Marseilles: tradition and modernity in French soccer and society; The drive to modernization and the supermarket imperative: who needs a new football stadium? Identities: Local, Ethnic, National: Rangers is a black club: race, identity and local football in England; Football and identity in the Ruhr: the case of Schalke 04; Wogball: ethnicity and violence in Australian soccer; Masculinity and football: the formation of national identity in Argentina; The stars and the flags: individuality, collective identities and the national dimension in Italia ’90 and Wimbledon ’91 and ’92. Subcultures of opposition: New supporter cultures and identity in France: the case of Paris Saint-Germain; False Leeds: the construction of hooligan confrontations; Keep it in the Family: an outline of Hibs’ football hooligans social ontology; The birth of the ultras: the rise of football hooliganism in Italy.