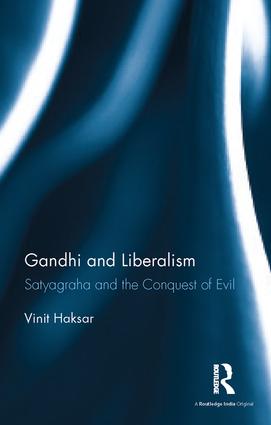 Satyagraha and the Conquest of Evil, 1st Edition

One of the main themes running through Gandhi’s life and work was the battle against evil. This book offers a fascinating reconstruction of Gandhi and the doctrine of Ahimsa or non-violence. Gandhi’s moral perfectionism is contrasted with other forms of perfectionism, but the book stresses that Gandhi also offered a doctrine of the second best. Following Gandhi, the author argues that outward violence with compassion is intrinsically not as good as non-violence with compassion, but it is a second best that is sometimes a necessary evil in an imperfect world. The book provides an illuminating analysis of coercion, non-co-operation, civil disobedience and necessary evil, comparing Gandhi’s ideas with that of some of the leading western moral, legal and political philosophers. Further, some of his important ideas are shown to have relevance for the working of the Indian Constitution.

This book will be essential for scholars and researchers in moral, legal and political philosophy, Gandhi studies, political science and South Asian studies.

‘A very good book, very carefully thought out and explained, backed by lifetime's knowledge of India and contributions to political philosophy.’

‘This unusual and exciting book makes a concerted attempt with clearly argued ideas to present both liberalism and Gandhi on issues such as civil disobedience and overcoming evil in society, and contributes to the present discussion in political theory by making some important corrections in the existing understanding of Gandhi.’

Professor A. Raghuramaraju, Department of Philosophy, University of Hyderabad, India

'This [is an] important book . . . any serious student of Gandhi's thought, or of non-violence and civil disobedience, or with dealing with the world's evil, can only profit from reading this persuasively argued and frequently delightful book.'

‘Vinit Haksar’s scholarship is truly admirable. He tells us not only the story of Gandhi, he also encourages us to see Gandhi in the context of the larger politico-philosophical issues the liberals are known for raising.’

‘Vinit Haksar's book is a welcome and original addition to this (Gandhian) literature, developing a cluster of related concepts central to liberal political thought ’

Acknowledgements. Introduction PART ONE 1. Violence in a Spirit of Love: Gandhi and the Limits of Non-Violence 2. Necessary Evil: Justification, Excuse or Pardon 3. Indian Secularism and Religious Accommodation: Liberal Balancing and Diversity with Harmony PART TWO 4. Civil Disobedience as a Form of Address 5. Non-Co-operation and Coercion 6. The Right to Civil Disobedience 7. Conclusion. Appendix to Chapter One. Appendix to Chapter Three. Index

Vinit Haksar has taught Philosophy at the Universities of Edinburgh, St Andrews and Oxford, UK. He is a Fellow of The Royal Society of Edinburgh and an Honorary Fellow, School of Philosophy, Psychology and Language Sciences, University of Edinburgh. He has held many visiting professorships including John Milton Scott Visiting Professorship, Queen’s University, Kingston, Canada, Dartmouth College, New Hampshire and Jawaharlal Nehru University, India. He has written several books including Equality, Liberty and Perfectionism (1979); Indivisible Selves and Moral Practice (1991); Rights, Communities and Disobedience (2001), and has published extensively in anthologies and international journals of philosophy, politics and law, apart from delivering many public lectures.