Gandhi and the Nobel Peace Prize 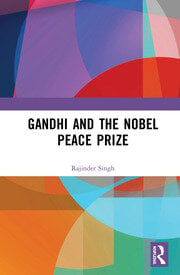 Gandhi and the Nobel Peace Prize

The Nobel Prize, according to the will of its founder Alfred Nobel, are awarded to persons for their services in the field of chemistry, physics, medicine and physiology, literature and peace. The Economic Sciences Prize was introduced by the Swedish Bank and  first awarded in 1969.
Till 1964, fourteen Indians – Aga Khan III, Raja Mahendra Pratap Singh, Hari Mohan Banerjee, Sanjib Kumar Chaudhuri, Benegal Narsing Rau, Rajah Bhushanman Manikam, Mahesh Prasad Varma alias His Holiness Bal Brahmachari, Maharishi Mahesh Yogi, Acharya Vinoba Bhave, Mehar Chand Davar, Sri Aurobindo Ghose, Jawaharlal Nehru, Sarvepalli Radhakrishnan and Mahatma Gandhi – were nominated for the Nobel Peace Prize.
An apostle of non-violent struggle and a crusader against colonialism and inequality Mohandas Karamchand Gandhi (popularly known as Mahatma Gandhi) was a much revered world figure. Between 1924 and 1948, in nearly 100 nominations (individual or joint) he was proposed for the Nobel Peace Prize. And yet despite international support, Gandhi was never a recipient of the Nobel Peace Prize. Why was it so? Was it the fault of the Nobel Committee? Perhaps his associates made mistakes? In order to answer such questions, the nomination letters, newspaper cuttings, reports of the experts’ of the Nobel Committee, confidential record of the Committee, and other unpublished documents were consulted from the Archives of the Peace Prize Institute. The results are discussed and analysed in this volume.
Please note: Taylor & Francis does not sell or distribute the Hardback in India, Pakistan, Nepal, Bhutan, Bangladesh and Sri Lanka

Rajinder Singh is Post-Doc at the University of Oldenburg, Germany. He is a member of editorial teams: Indian Journal of History of Science, Indian National Science Academy, Delhi; and Science and Culture, Indian Science News Association, Kolkata.