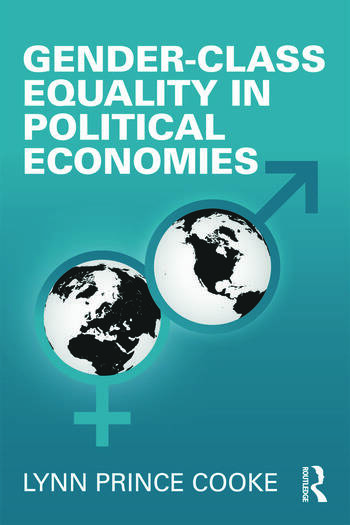 Gender-Class Equality in Political Economies offers an in-depth analysis of gender-class equality across six countries to reveal why gender-class equality in paid and unpaid work remains elusive, and what more policy might do to achieve better social and economic outcomes. This book is the first to meld cross-time with cross-country comparisons, link macro structures to micro behavior, and connect class with gender dynamics to yield fresh insights into where we are on the road to gender equality, why it varies across industrialized countries, and the barriers to further progress.

Lynn Prince Cooke is a professor of sociology at the University of Surrey, UK. Her research, exploring policy effects on group outcomes, has appeared in American Journal of Sociology, European Sociological Review, and Journal of Marriage and Family, for which she co-authored the 2010 decade review essay on cross-national research.

" In this truly unique text, Lynn Prince Cooke shows how gender and class inequalities intersect all depending on the nature of welfare state policy. It fills a massive void by adding a gender dimension to class analysis, and a class dimension to research on gender inequalities. It should be obligatory reading in courses on social policy, gender, and social stratification."

"Gender-Class Equality in Political Economies represents comparative scholarship at its best. The book will be invaluable as an example of best-practice research for students in gender, family, state and inequality courses, as well as providing a wealth of valuable historical and current information for scholars and anyone interested in understanding class and gender inequality in comparative context."

"Cooke no longer 'adds gender and stirs' it into the customary male-centered story of stratification, but rethinks the fundamental processes of inequality as being simultaneously about production and reproduction. Cooke succeeds so well in placing reproduction in an integrated and important position in the overall story of stratification that one might wonder how the old-style production-only accounts ever seemed plausible."

"Two questions constitute the frontier of research on gender and the state: First, how do state policies shape gender inequalities and, second, how are gender and class inequalities intertwined? Lynn Cooke blends historical and comparative analyses to tackle both questions. The result is a lively book brimming with policy implications."

"This interesting, useful, and provocative book is unique in using historical, longitudinal, and comparative cross-cultural data to provide a new model for understanding persistent gender inequalities. I look forward to drawing on the theoretical and methodological approach, and substantive material in teaching on gender, families and social policy."

"A myriad of detailed, painstakingly collected historical facts are combined with complex arguments and integrated accounts of social policy origins and developments across six societies on three continents in this insightful book."

—Sonja Drobnič, University of Hamburg, in American Journal of Sociology

"[Gender-Class Equality in Political Economies] goes beyond the narrower focus taken by the majority of comparative studies in political economy and opens our perspective to the broader web of class and gender inequities."

"Scholars interested in both the complexity and the resilience of inequalities in contemporary societies will find much food for thought in this broadly comparative investigation by Lynn Prince Cooke."