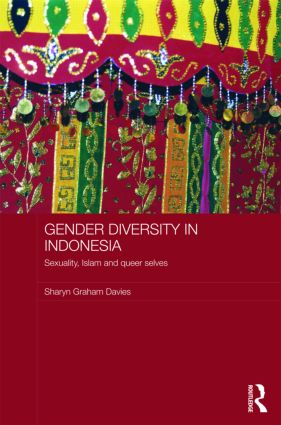 Indonesia provides particularly interesting examples of gender diversity. Same-sex relations, transvestism and cross-gender behaviour have long been noted amongst a wide range of Indonesian peoples. This book explores the nature of gender diversity in Indonesia, and with the world’s largest Muslim population, it examines Islam in this context. Based on extensive ethnographic research, it discusses in particular calalai – female-born individuals who identify as neither woman nor man; calabai – male-born individuals who also identify as neither man nor woman; and bissu – an order of shamans who embody female and male elements. The book examines the lives and roles of these variously gendered subjectivities in everyday life, including in low-status and high-status ritual such as wedding ceremonies, fashion parades, cultural festivals, Islamic recitations and shamanistic rituals. The book analyses the place of such subjectivities in relation to theories of gender, gender diversity and sexuality.

"[A] comprehensive study of gender diversity in Indonesia… the book is an excellent, ethnographically thick and deep description of structures, discourses, negotiations and experiences of gender in Bugis South Sulawesi. The author's careful consideration of a whole range of aspects, frames and spaces relating to gender shows the complexity of the subject positions and the creativity of the people who live those positions… Graham Davies sets out to 'contribute to knowledge about gender' and she certainly succeeds." - Dr. Karin Klenke, Department of Social and Cultural Anthropology, Georg-August University, Germany

"In this rich exploration of sexuality, gender, and queer subject positioning among the Bugis of South Sulawesi, Indonesia, Sharyn Graham Davies…offers a fascinating discussion of the intersections of Islamic thought and practice with Bugis gender diversity… [the book] would be an excellent addition to upper-level undergraduate and graduate classrooms in gender and sexuality studies." - Leslie Dwyer, American Anthropologist

Sharyn Graham Davies is Associate Professor in the School of Languages and Social Sciences at Auckland University of Technology, New Zealand. She has spent a number of years living in Indonesia and has written extensively on gender and sexuality, including most recently Challenging Gender Norms: Five Genders among Bugis in Indonesia, Thompson Wadsworth, 2007.