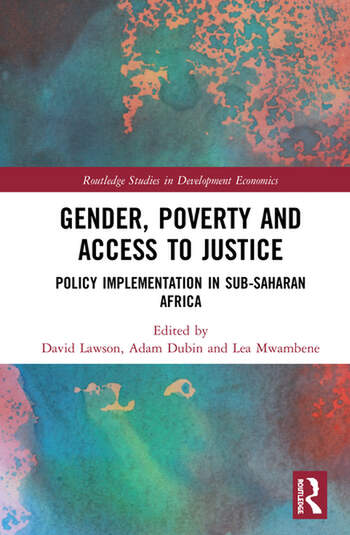 Access to justice is a fundamental right guaranteed under a wide body of international, regional and domestic law. It is also an essential component of development policies which seek to adequately respond to the multidimensional deprivations faced by the poor in order to improve socio-economic well-being and advance the progress of the Sustainable Development Goals. Women and children make up most of Africa’s poorest and most marginalized population, and as such are often prevented from enforcing rights or seeking other recourse.

This book explores and analyzes the issue of gendered access to justice, poverty and disempowerment across Sub-Saharan Africa (SSA), and provides policy discussions on the integration of gender in justice programming. Through individual country case studies, the book focuses on the challenges, obstacles and successes of developing and implementing gender focused access to justice policies and programming in the region.

This multidisciplinary volume will be of interest to policy makers as well as scholars and researchers focusing on poverty and gender policy across law, economics and global development in Sub-Saharan Africa. Additionally, the volume provides policy discussion applicable in other geographical areas where access to justice is elusive for the poor and marginalized.

List of illustrations. List of contributors. Foreword. Preface. Acknowledgments.
Part I. Access to justice in Sub-Saharan Africa: justice policies on reaching the most vulnerable and extreme poor 1 Engendering access to justice for the poorest and most vulnerable in Sub-Saharan Africa. David Lawson, Adam Dubin, Lea Mwambene and Bisrat Woldemichael 2 Access to justice for children in Zimbabwe. Julia Sloth-Nielsen and Blessing Mushohwe 3 Children, forced and early marriage: preventing and responding to early marriage in Uganda. Asieh Yousefnajad Shomali and David Lawson 4 A child belongs to (s)he who has paid the bride price: customary law adoption of children in Limpopo, South Africa. Kagiso A. Maphalle

David Lawson is Senior Researcher at The Nordic Africa Institute, Uppsala, Visiting Professor at The University of Helsinki and Associate Professor of Development Economics and Public Policy at the University of Manchester. He has 25 years of developing country public policy experience, particularly in relation to policy implementation and research on extreme poverty and gender, in SSA. He has published in leading development journals and consulted and advised extensively for the UNECA and World Bank.

Adam Dubin is an Assistant Professor of Law in the International Public Law Department of Universidad Pontificia Comillas in Madrid, Spain, where he also directs a Master’s program in International and European Business Law and a clinical program on human rights in Sub-Saharan Africa. He is also an Adjunct Professor of Politics at New York University’s Madrid Campus, where he teaches Introduction to International Development an Comparative Human Rights Law. Dr Dubin has extensively consulted for organizations such as the UN and EU on human rights and development projects.

Lea Mwambene is Professor of Law in the department of Private Law, and currently the Deputy Dean: Teaching and Learning of the Faculty of Law, University of the Western Cape, South Africa. Her teaching and research interests are in the general fields of African customary law and human rights. Driven by the genuine concern about the interaction between law, ideology and social practice, her recent research (with Ms Helen Kruuse from Rhodes University, South Africa) has included fieldwork in the Eastern Cape, South Africa, interviewing rural people about the impact of the reformed customary marriage laws in South Africa on the enjoyment of human rights by women and children.