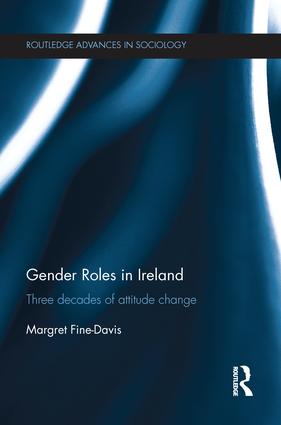 Gender Roles in Ireland: three decades of attitude change documents changing attitudes toward the role of women in Ireland from 1975 to 2005, a key period of social change in this society. The book presents replicated measures from four separate surveys carried out over three decades. These cover a wide range of gender role attitudes as well as key social issues concerning the role of women in Ireland, including equal pay, equal employment opportunity, maternal employment, contraception etc. Attitudes to abortion, divorce and moral issues are also presented and discussed in the context of people’s voting behaviour in national referenda. Taken together, the data available in these studies paint a detailed and complex picture of the evolving role of women in Ireland during a period of rapid social change and key developments in social legislation. The book brings the results up to the present by including new data on current gender role issues from Margret Fine-Davis' latest research.

"Gender Roles in Ireland: Three Decades of Attitude Change is a significant and timely work. Fine-Davis conducted five studies between 1975 and 2010, and the culmination of these data provides a unique vignette of Irish society when attitudes toward gender and the role of women underwent major change. Well contextualised, insightful and clear, Fine-Davis has crafted this book expertly and her findings illustrate the complexities of gender and gender role attitudes."

"Her analyses of attitudes towards abortion is particularly revealing. Fine-Davis finds an 'unexpectedly high degree of consensus between those who voted for and against the [Eighth] Amendment' (156) in their acceptance of exceptional circumstances under which abortion should be made permissible.[…]Given the incongruence between public attitudes and legislative and constitutional bans, Fine-Davis’ conclusion is the only one possible: 'It is obvious that legislation [regarding abortion] is not keeping pace with the wishes of the population' (174)."

- Katherine Side, Memorial University of Newfoundland