Gender, Sexuality, and the Law 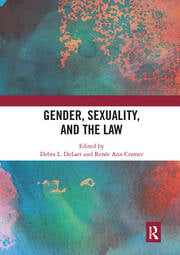 Gender, Sexuality, and the Law

This volume examines the role of law as a tool for advancing womenâ€™s rights and gender equity in local, national, and global contexts.

Many feminist scholars note a marked failure of law to achieve goals connected to womenâ€™s rights and gender equality. Despite its limitations, law provides aspirational norms that can be mobilized to hold institutions accountable and to provide material benefit to those excluded from systems of power. In conversation with each other, the chapters in this volume help to advance understanding of both the limitations and the potential of law as a tool for advancing democratic participation, rights, and justice around issues related to gender and sexuality. Contributors acknowledge, to varying degrees, that law has important symbolism and may be used as a lever to mobilize change. At the same time, some offer cautionary notes about the potential downside risks and unintended consequences of relying upon law in pursuit of womenâ€™s rights and gender equity.

Collectively, the chapters in this volume explore the disjuncture between the promise and expectation of legal reform and the lived experience of those laws by people intended as the beneficiaries of legal change. This book was originally published as a special issue of Global Discourse.

Introduction: Gender, Sexuality, and the Law  1. Lost in Legation: the Gap Between Rhetoric and Reality in International Human Rights Law Governing Womenâ€™s Rights  2. Whatâ€™s at Stake in the Treaty Reporting Process? Cuba and the United Nationsâ€™ Convention on Womenâ€™s Rights  3. Gender Politics and Geopolitics of International Criminal Law in Uganda  4. Spaces of International Gender Justice: A Reply to Baldez and DeLaet  5. Tacking Between the Global and the Local: A Reply to DeLaet and Bunting  6. Whatâ€™s Law Got to Do with It?: A Reply to Baldez and Bunting  7. Attempting International Normative Change in Gender and the Law: A Reply to DeLaet, Baldez, and Bunting  8. â€˜The Stigma of Western wordsâ€™: Asylum Law, Transgender Identity and Sexual Orientation in South Africa  9. Gender, Sexuality, and the Right to a Non-Projected Future: a Reply to Camminga  10. Gender, Sexuality and the Limits of the Law  11. Wo/andering about Walls: A Reply to Elizabeth Mills  12. The Problem of Visibility in LGBT Human Rights: A Reply to Camminga and Mills  13. The Limits of Law in Securing Reproductive Freedoms: Midwife-Assisted Homebirth in the United States  14. Mothers Do Not Make Good Workers: The Role of Work/Life Balance Policies in Reinforcing Gendered Stereotypes  15. Embedded Exclusions: Exploring Gender Equality in Peruâ€™s Participatory Democratic Framework  16. Gender, the Workplace and the Limits of the Law: A Reply to Cramer and Cote Hampson  17. Lawâ€™s Promises and its Limits: A Reply to Cramer and McNulty  18. Process is Insufficient: A Reply to Hampson and McNulty  19. Policymaking for Gender Equality: A Reply to Cramer, Cote Hampson, and McNulty

is Professor of Law, Politics, and Society at Drake University, USA. Since 2004, she has been engaged in ethnographic and participant-observation field work with homebirth midwives, advocates for midwifery, and families who have had out-of-hospital births.