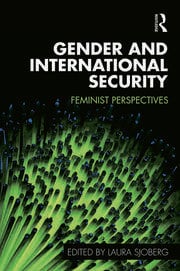 Gender issues have an important place in the international security landscape, but have been neglected both in the theory and practice of international security. The passage and implementation of UN Security Council Resolution 1325 (on Security Council operations), the integration of gender concerns into peacekeeping, the management of refugees, post-conflict disarmament and reintegration and protection for non-combatants in times of war shows the increasing importance of gender sensitivity for actors on all fronts in global security. This book aims to improve the quality and quantity of conversations between feminist security studies and security studies more generally, in order to demonstrate the importance of gender analysis to the study of international security, and to expand the feminist research program in Security Studies. The chapters included in this book not only challenge the assumed irrelevance of gender, they argue that gender is not a subsection of security studies to be compartmentalized or briefly considered as a side issue. Rather, the contributors argue that gender is conceptually, empirically, and normatively essential to studying international security.  They do so by critiquing and reconstructing key concepts of and theories in international security, by looking for the increasingly complex roles women play as security actors, and by looking at various contemporary security issues through gendered lenses.  Together, these chapters make the case that accurate, rigorous, and ethical scholarship of international security cannot be produced without taking account of women’s presence in or the gendering of world politics.

This book will be of interest to all students of critical security studies, gender studies and International Relations in general.

Laura Sjoberg is Assistant Professor of Political Science at the University of Florida. She has a Phd in International Relations and Gender Studies from the University of Southern California and is the author of Gender, Justice, and the Wars in Iraq (2006) and, with Caron Gentry, Mothers, Monsters, Whores: Women's Violence in Global Politics (2007)

Laura Sjoberg is Assistant Professor of Political Science at the University of Florida. She has a PhD in International Relations and Gender Studies from the University of Southern California and a JD from Boston College Law School. She is the author of Gender, Justice, and the Wars in Iraq (2006) and, with Caron Gentry, Mothers, Monsters, Whores: Women's Violence in Global Politics (2007).