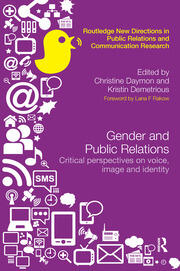 Although there is a small body of feminist scholarship that problematizes gender in public relations, gender is a relatively undefined area of thinking in the field and there have been few serious studies of the socially constructed roles defining women and men in public relations.

This book is positioned within the critical public relations stream. Through the prism of ‘gender and public relations’, it examines not only the manipulatory, but also the emancipatory, subversive and transformatory potential of public relations for the construction of meaning. Its focus is on the dynamic interrelationships arising from public relations activities in society and the gendered, lived experiences of people working in the occupation of public relations. There are many previously unexplored areas within and through public relations which the book examines. These include:

In extending the field of inquiry, this edited collection highlights how gender is accomplished and transformed, and, thus how power is exercised and inequality (re)produced or challenged in public relations. The book will expand thinking about power relations and privilege for both women and men and how these are affected by the interplay of social, cultural and institutional practices.

Christine Daymon is Associate Professor of Communication Management at Murdoch University, Australia. She is co-author of the successful Routledge book Qualitative Research Methods in Public Relations and Marketing Communications, now in its second edition.

This enjoyable and varied volume represents yet another example of how public relations theory is steadfastly catching up with the development within social theory. This is a critical lens that is used focusing on the lived experience of the research participants. The volume goes well beyond liberal feminist approaches to challenge our thinking on gender issues. It is about time.

The editors and contributors open up new insights into the taken-for-granted approaches to gender and public relations that have guided feminist scholars in the field of public relations and that have eluded the attention of other scholars for at least the last 40 years.