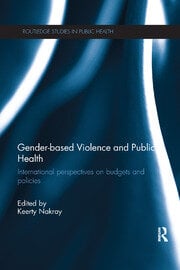 Gender-based violence is a multi-faceted public health problem with numerous consequences for an individual’s physical and mental health and wellbeing. This collection develops a comprehensive public health approach for working with gender-based violence, paying specific attention to international budgets, policies and practice and drawing on a wide selection of empirical studies.

Divided into two parts, the text looks at how public health budgets and policies can be used to influence a range of risk factors and outcomes, and then outlines a theoretical and conceptual framework. The second section draws on empirical studies to illustrate ways of managing the risks and impacts of, and responses to, the problem. It concludes by summarising those risk factors that can be effectively addressed through appropriately budgeted public health programmes globally. Highlighting ways of bolstering protective and resilience factors and identifying early interventions, it demonstrates the importance of inter-agency interventions through coordinated effort from a wide range of sectors including social services, education, religious organisations, judiciary, police, media and business.

Keerty Nakray is an Assistant Professor and Assistant Director of the Centre for Women, Law and Social Change at the Jindal Global Law School, OP Jindal Global University, India.

'This volume provides students and researchers with a thorough description of the societal and cultural contexts of GBV in a diverse range of locations…Keerty Nakray’s major accomplishment with this book is how eloquently it highlights the importance of violence as an underlying cause of women’s health problems worldwide, and illuminates the enormity of the challenge towards public recognition and response.' – Critical Public Health.