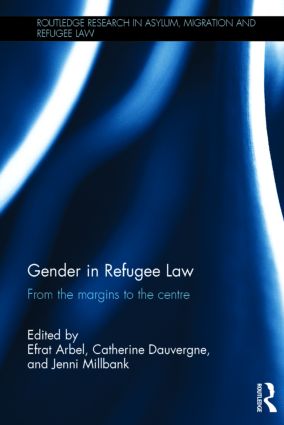 From the Margins to the Centre, 1st Edition

Questions of gender have strongly influenced the development of international refugee law over the last few decades. This volume assesses the progress toward appropriate recognition of gender-related persecution in refugee law. It documents the advances made following intense advocacy around the world in the 1990s, and evaluates the extent to which gender has been successfully integrated into refugee law.

Evaluating the research and advocacy agendas for gender in refugee law ten years beyond the 2002 UNHCR Gender Guidelines, the book investigates the current status of gender in refugee law. It examines gender-related persecution claims of both women and men, including those based on sexual orientation and gender identity, and explores how the development of an anti-refugee agenda in many Western states exponentially increases vulnerability for refugees making gendered claims. The volume includes contributions from scholars and members of the advocacy community that allow the book to examine conceptual and doctrinal themes arising at the intersection of gender and refugee law, and specific case studies across major Western refugee-receiving nations. The book will be of great interest and value to researchers and students of asylum and immigration law, international politics, and gender studies.

Overall, due to its inter-disciplinarity, Gender in Refugee Law is very accessible to a diverse readership. As the book discusses past developments as well as the current state of gender in refugee law, it is very informative for people new to, as well as those already familiar with, the topic. - Hannah Baumeister, Aberystwyth University for International Journal of Refugee Law (2014, Vol. 26, No. 4, 716–729)

1. Introduction: Gender in Refugee Law: From the Margins to the Centre, Efrat Arbel, Catherine Dauvergne and Jenni Millbank 2. Why We Are Not There Yet: The Particular Challenge of ‘Particular Social Group’, Michelle Foster 3. Legal Change from the Bottom Up: The Development of Gender Asylum Jurisprudence in the United States, Deborah E. Anker 4. A Tale of Two Women: The Claims for Asylum of Fauziya Kassindja, who Fled FGC, and Rody Alvarado, a Survivor of Partner (Domestic) Violence, Karen Musalo 5. Falling at Each Hurdle: Assessing the Credibility of Women’s Asylum Claims in Europe, Debora Singer 6. Psychological Barriers to Fair Refugee Status Determination Related to Our Understanding and Expression of Gender, Jane Herlihy 7. Lesbians and UK Asylum Law: Evidence and Existence, Claire Bennett 8. Where Are the Women? 9. Human Trafficking and Refugee Women, Susan Kneebone 10. Women Fleeing Armed Conflict: Seeking International Protection in the United Kingdom, Christel Querton 11. Training and Strategic Litigation: Tools for Enhanced Protection of Gender-Related Asylum Applicants in Europe, Maria Hennessy 12. Gendered Border Crossings, Efrat Arbel 13. Evaluating Canada’s Approach to Gender-Related Persecution: Revisiting and Re-embracing ‘Refugee Women and the Imperative of Categories’, Shauna Labman and Catherine Dauvergne

Efrat Arbel is Assistant Professor of Law at the University of British Columbia. She works in the areas of constitutional law, refugee law, Aboriginal law, and prison law, in Canada and the United States.

Catherine Dauvergneis Professor of Law at the University of British Columbia. She works in the areas of immigration and refugee laws, in Canada and around the world.

Jenni Millbank is Professor of Law at University of Technology, Sydney. Her socio-legal scholarship is broadly concerned with gender and sexuality and takes place across a number of sites including: family, relationship, reproduction and refugee law.