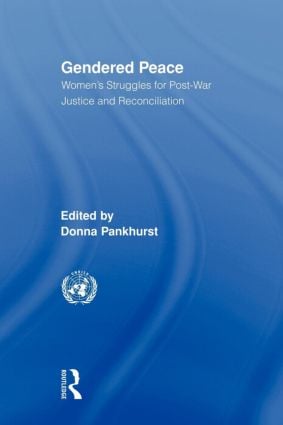 This volume contributes to the growing literature on women, conflict and peacebuilding by focusing on the moments after a peace accord, or some other official ending of a conflict, often denoted as ‘post-conflict’ or ‘post-war’. Such moments often herald great hope for holding to account those who committed grave wrongs during the conflict, and for a better life in the future. For many women, both of these hopes are often very quickly shattered in starkly different ways to the hopes of men. Such periods are often characterized by violence and insecurities, and the official ending of a war often fails to bring freedom from sexual violence for many women. Within such a context, efforts on the part of women, and those made on their behalf, to hold to account those who commit crimes against them, and to access their rights are difficult to make, are often dangerous, and are also often deployed with little effect. Gendered Peace explores international contexts, and a variety of local ones, in which such struggles take place, and evaluates their progress. The volume highlights the surprising success in the development of international legal advances for women, but contrasts this with the actual experience of women in cases from Sierra Leone, Rwanda, South Africa, Afghanistan, Bangladesh, East Timor, Peru, Central America and the Balkans.'

"Your justice is too slow." Will the International Criminal Tribunal for Rwanda Fail Rwanda’s Rape Victims?

Gender Injustice and The South African Truth and Reconciliation Commission

The Politics of Gender and Reconstruction in Afghanistan: Old Dilemmas or New Challenges?

The Chittagong Hill Tracts (CHT) Accord and After: Gendered Dimensions of Peace

Gendered War, Gendered Peace: Violent Conflicts in The Balkans and its Consequences

Post-War Backlash Violence Against Women: What Can ‘Masculinity’ Explain?

Donna Pankhurst is Professor of Peacebuilding and Development at the Department of Peace Studies, University of Bradford. In recent years she has researched in Africa on conflict, post- conflict settlements, and peacebuilding, particularly with a focus on gender issues. Recent publications include: ‘Sex Wars and Other Wars. Towards a Feminist Approach to Peacebuilding’ in Development and Practice , 13, 2 & 3, 154-177, 2003; ‘Women and Politics in Africa: The Case of Uganda’, Parliamentary Affairs, 55, 1, 2002: 119-128; ‘Unravelling Reconciliation and Justice? Land and the Potential for Conflict in Namibia’ in Peace and Change, 25, 2, 2000: 239-254; ‘Issues of Justice and Reconciliation in Complex Political Emergencies', Third World Quarterly, 20, 1, 1999: 239-256.

Routledge/UNRISD Research in Gender and Development