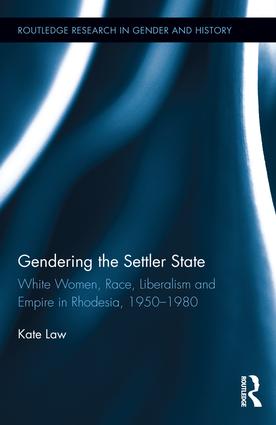 White women cut an ambivalent figure in the transnational history of the British Empire. They tend to be remembered as malicious harridans personifying the worst excesses of colonialism, as vacuous fusspots, whose lives were punctuated by a series of frivolous pastimes, or as casualties of patriarchy, constrained by male actions and gendered ideologies. This book, which places itself amongst other "new imperial histories", argues that the reality of the situation, is of course, much more intricate and complex. Focusing on post-war colonial Rhodesia, Gendering the Settler State provides a fine-grained analysis of the role(s) of white women in the colonial enterprise, arguing that they held ambiguous and inconsistent views on a variety of issues including liberalism, gender, race and colonialism.

"Law takes us inside the world of white Rhodesian women, and how they navigated the complex politics of one of the oddest moments in the history of decolonisation… [this book]… offers: a new way to think through Rhodesia’s post-war history, and thus to consider how decolonisation studies might incorporate new interpretations located in the politics of race and gender… It is Law’s achievement to have captured the complex and sometimes contradictory nuances of this extraordinary moment. The connecting tissue linking gender and decolonisation has found its voice in this pioneering and important study."

"This is a well-researched, engaging study that I can recommend to scholars and students interested in gender and colonialism, gendered perspectives on decolonisation, and modern Southern African history. It engages in a critique of the patriarchal structures of a racialized settler colony and provides fresh insight into the white settler mentality that refused any liberal concessions to African rights."

"Law’s book makes a bold and essential contribution to the growing literature on white Rhodesia in the post- war period, as well as broader understandings of empire, decolonisation, and gender within settler societies."

Kate Law is a women’s, gender and empire historian who specialises in twentieth-century sub-Saharan African history. She is currently a lecturer in Gender Studies in the centre for Africa studies at the University of the Free State, South Africa.

Routledge Research in Gender and History