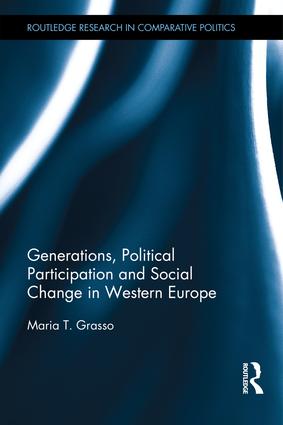 This new comparative analysis shows that there are reasons to be concerned about the future of democratic politics. Younger generations have become disengaged from the political process. The evidence presented in this comprehensive study shows that they are not just less likely than older generations to engage in institutional political activism such as voting and party membership - they are also less likely to engage in extra-institutional protest activism.

The book is of key interest to scholars, students and practitioners of political sociology, political participation and behaviour, European Politics, Comparative Politics and Sociology.

Maria Grasso’s masterful comparative analysis provides a fresh look on the study of political participation and, more broadly, on the functioning of democracy. Her book fits squarely with a long-standing research tradition in sociology and political science, namely the study of generations and political engagement. She shows that both conventional and unconventional forms of participation have declined, and will continue to fall in the future with new, less politicized generations replacing older, more civic ones. - Marco Giugni, Professor and Director of the Institute of Citizenship Studies, University of Geneva, Switzerland

A truly wonderful and deeply original book which demonstrates, as never before, the profound influence of cohort effects and socialisation on political participation and the continuing significance of domestic political factors. Theoretically innovative, methodologically sophisticated and thoroughly convincing, Maria Grasso puts down a very significant marker in a debate whose importance can scarcely be exaggerated.

In this important book, Maria Grasso carefully employs a rich body of data to uncover the continued importance of political generation and national context: while our formative experiences do not determine our future political behaviour, they do have a long-lasting influence throughout our lives - with long term implications for our politics.

This is one of the best sustained analyses of political generations and democratic participation to date. Grasso’s analysis is both theoretically nuanced and rigorously empirical. Her careful methodology allows her to disentangle the effects of generation, age, and period in ten Western European democracies. Analyzing five political generations, Grasso convincingly shows the lasting effects of formative experiences and the ongoing centrality of the 1960s "protest generation" to new social movements. The book has important implications for democratic engagement: as younger generations replace Baby Boomers, Western European democracies are likely to see declining participation in social movements and in conventional politics.

Maria T. Grasso is a Lecturer in Politics and Quantitative Methods at the Department of Politics, University of Sheffield, UK, and Deputy Editor for Western Europe of Mobilization: An International Quarterly.