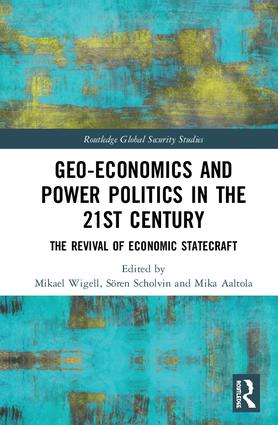 Geo-economics and Power Politics in the 21st Century

Starting from the key concept of geo-economics, this book investigates the new power politics and argues that the changing structural features of the contemporary international system are recasting the strategic imperatives of foreign policy practice.

States increasingly practice power politics by economic means. Whether it is about Iran’s nuclear programme or Russia’s annexation of Crimea, Western states prefer economic sanctions to military force. Most rising powers have also become cunning agents of economic statecraft. China, for instance, is using finance, investment and trade as means to gain strategic influence and embed its global rise. Yet the way states use economic power to pursue strategic aims remains an understudied topic in International Political Economy and International Relations. The contributions to this volume assess geo-economics as a form of power politics. They show how power and security are no longer simply coupled to the physical control of territory by military means, but also to commanding and manipulating the economic binds that are decisive in today’s globalised and highly interconnected world. Indeed, as the volume shows, the ability to wield economic power forms an essential means in the foreign policies of major powers. In so doing, the book challenges simplistic accounts of a return to traditional, military-driven geopolitics, while not succumbing to any unfounded idealism based on the supposedly stabilising effects of interdependence on international relations. As such, it advances our understanding of geo-economics as a strategic practice and as an innovative and timely analytical approach.

This book will be of much interest to students of security studies, international political economy, foreign policy and International Relations in general.

Mikael Wigell is Senior Research Fellow at the Finnish Institute of International Affairs and Adjunct Professor in International Political Economy at the University of Tampere, Finland.

is Research Fellow at the Institute of Economic and Cultural Geography, University of Hanover, Germany.