Geopolitics
From the Cold War to the 21st Century 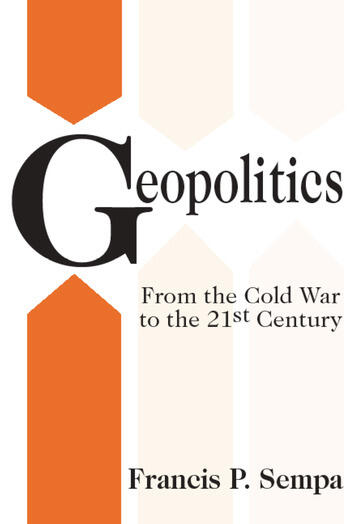 Geopolitics: From the Cold War to the 21st Century

Writers, observers, and practitioners of international politics frequently invoke the term "geopolitics" to describe, explain, or analyze specific foreign policy issues and problems. Such generalized usage ignores the fact that geopolitics as a method of understanding international relations has a history that includes a common vocabulary, well-established if sometimes conflicting concepts, an extensive body of thought, and a recognized group of theorists and scholars. In Geopolitics, Francis P. Sempa presents a history of geopolitical thought and applies its classical analyses to Cold War and post-Cold War international relations.

While mindful of the impact of such concepts as "globalization" and the "information revolution" on our understanding of contemporary events, Sempa emphasizes traditional geopolitical theories in explaining the outcome of the Cold War. He shows that, the struggle between the Western allies and the Soviet empire was unique in its ideological component and nuclear standoff, the Cold War fits into a recurring geopolitical pattern. It can be seen as a consequence of competition between land powers and sea powers, and between a potential Eurasian hegemonic power and a coalition of states opposed to that would-be hegemony.

The collapse of the Soviet empire ended the most recent threat to global stability. Acting as a successor to the British Empire, the United States organized, funded, and led a grand coalition that successfully countered the Soviet quest for domination. No power or alliance posed an immediate threat to the global balance of power. Indeed, the end of the Cold War generated hopes for a "new world order" and predictions that economics would replace geopolitics as the driving force in international politics. Russian instability, the nuclear dimension of the India-Pakistan conflict, and Chinese bids for dominance have turned the Asia-Pacific region into what Mahan called "debatable and debated ground." Russia, Turkey, Iran, India, Pakistan, China, Japan, the Koreas, and the United States all have interests that collide in one or more of the areas of this region.