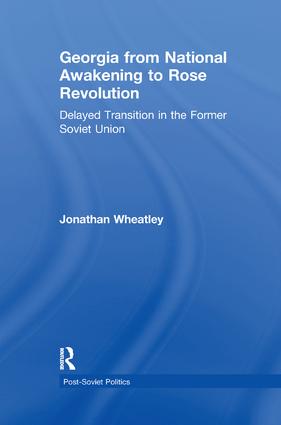 Jonathan Wheatley examines the tortuous process of regime change in Georgia from the first pro-independence protests of 1988 to the aftermath of the so-called Rose Revolution in 2004. It is set within a comparative framework that includes other transition countries, particularly those in the former Soviet Union. The book provides two important theoretical innovations: the notion of a regime, which is an under-theorized concept in the field of transition literature, and O'Donnell, Schmitter and Karl's notion of a dynamic actor-driven transition. The volume turns to the structural constraints that framed the transition in Georgia and in other republics of the former Soviet Union by looking at the state and society in the USSR at the close of the Soviet period. It examines the evolution and nature of the Georgian regime, and ultimately addresses the theoretical and empirical problems posed by Georgia's so-called Rose Revolution following the falsification of parliamentary elections by the incumbent authorities.

'Georgia is not just an awkward little "new" country to the south of the Caucasus. Jonathan Wheatley shows in his masterly analysis that its importance touches the geostrategic situation in the wider world; and he conveys to his readers the complex internal tensions that have produced the swirl of events in Tbilisi.' Robert Service, St Antony's College, University of Oxford, UK 'Nationalism and democracy have had an uncertain relationship historically - and nowhere more so than in the remnants of the former Soviet Union…In an extraordinarily detailed and comprehensive analysis of this little-known case, Wheatley succeeds in bringing it within the fold of comparative democratization studies, up to and including its recent "Rose Revolution". I recommend this book not only to specialists on post-communism, but also to scholars and students of nationalism and democracy elsewhere.' Philippe C. Schmitter, European University Institute, Italy 'Jonathan Wheatley…ably tells the story of social and ethinic upheaval that brought down the Communists…This is the best and most complete narrative we have of the turbulent and often confusing events that did anything but lead to a stable democratic state…Conversant with current thinking in political science and sensitive to the nuances and textures of Georgian politics, Wheatley has written an invaluable fuide to that ill-fated country's recent past.' The Russian Review '…Wheatley is very knowledgeable about Georgia. He has done detailed research in newspapers, including Georgian ones, interviewed many of th eparticipants, and writes a splended final chapter on the Rose Revolution that is the best analysis we have yet…the book provides an excellent overview of Georgia since independence and fills an importnat gap for students and scholars.' Slavic Review 'There are very few monographs dedicated to post-Soviet Georgia. This work therefore fills an evident gap, even more so because, centred as it is on questions of

Contents: Map of Georgia's Provinces; Actors and structures: the anatomy and evolution of regimes; The Soviet legacy: implications for regime change; Nationalist mobilization in Georgia 1989-1991; Shevardnadze's return and its aftermath 1992-1995; Profile of a corrupt regime: the Georgian State 1996-2001; Pressure from below: the influence of society on the Georgian State 1996-2001; The 'Rose Revolution': a second transition?; Conclusion; Appendix; Bibliography; Index.

Jonathan Wheatley is Research Fellow at the Osteuropa Institute of the Free University Berlin, Germany. He is part of a project called 'Accounting for State-Building, Stability and Violent Conflict: The Institutional Framework of Caucasian and Central Asian Transitional Societies'. The project explores the conditions for successful/failed defusing of conflict potential in Caucasian and Central Asian societies within the context of successful/failed state building.