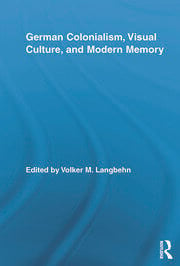 There is no overarching master narrative in understanding the history of German colonialism, and over the past decade, the study of Germany’s colonial past has experienced a dramatic transformation in its scope of inquiry. Influenced by new theoretical and methodological approaches to the study of race, nationalism, and globalization, these new studies initiate a process of reevaluating and redefining the parameters within which German Colonialism is understood. The role of visual materials, in particular, is ideal for exploring the porousness of disciplinary boundaries, though visual culture studies pertaining to German history – and especially German colonialism – have previously been almost completely neglected. Investigating visual communication and mass culture, print culture and suggestive racial politics, racial aesthetics, racial politics and early German film, racial continuity and German film, and photography, German Colonialism, Visual Culture, and Modern Memory offers compelling evidence of a German society between 1884 and 1919 that produced vibrant and heterogeneous – and at times contradictory – cultures of colonialism.

This collection of new essays illustrates the dramatic changes and vast array of perspectives that have recently emerged in the study of German colonialism. In documenting the latest cutting-edge research of German colonial history, the contributors to this volume prove wrong the persistent assumptions that the creation of Germany’s colonial empire did not have any lasting impact on German political and cultural life. Their essays document how colonialism in its various forms was entwined with the inner workings of modern German life and society, especially through the cultural and technical innovations of its time. In contrast to existing research, these studies show that colonial Germany played a significant role in shaping German perceptions of racial difference, influenced German support for World War I, and facilitated the construction of German nationalism. German Colonialism, Visual Culture, and Modern Memory uniquely demonstrates that the visual culture of colonialism is closely linked to the fascination with new modes of seeing and the enigma of visual experience that have become trademarks of modernity.

Volker Langbehn (Ph.D. University of Minnesota, Minneapolis, 1998) is Associate Professor of German at San Francisco State University, California. He is the author of Arno Schmidt's Zettels Traum: An Analysis (2003) and has published articles on Friedrich Nietzsche, Christa Wolf, Arno Schmidt, Fritz von Unruh, Novalis and Gert Heidenreich, and the visual representation of German Colonialism. He is the co-editor with Dr. Mohammad Salama of Colonial (Dis)-Continuities: Race, Holocaust, and Postwar Germany (2010). His current book project tentatively titled The Visual Representation of Cultural Identity in German Mass Culture Around 1900 focuses on visual representations of Africa in German mass culture. It is a study of how racism can develop in a modern society through subtle, everyday means, and it explores the negative consequences of race thinking upon the long-term development of German identity. He examines how images of Africa and Africans contained in four types of media – political caricatures in satirical magazines, picture postcards, black-and-white photographs, and illustrated children’s literature – helped foster a racialized German national identity.

‘[A] comprehensive collection of studies that examine materials from new and creative angles. The inclusion of essays on both issues of actual German colonialism, as well as its continuation in different shapes in postcolonial times, convincingly demonstrates that continuous engagement with its ideological legacy is still of relevance today. … What distinguishes most contributions is the interdisciplinary methods of inquiry their authors use to provide new insights into German colonialism and its impact.’
– German Studies Review