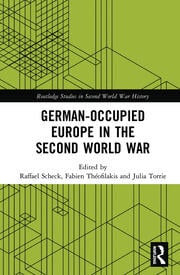 Inspired by recent works on Nazi empire, this book provides a framework to guide occupation research with a broad comparative angle focusing on human interactions. Overcoming national compartmentalization, it examines Nazi occupations with attention to relations between occupiers and local populations and differences among occupation regimes.

This is a timely book which engages in historical and current conversations on European nationalisms and the rise of right-wing populisms.

INTRODUCTION by the Editors

Chapter 5: From a Nazi Imperialism to a Fascist Imperialism: Transnational Nationalisms and the Creation of a "New Europe", by Eric Roubinek

Chapter 6: From Principles to Pragmatism: The SS in Occupied France, 1940-1944, by Thomas Laub

Chapter 7: German Occupation of Italy, 1943-45: Conflicting Authorities and Contrasting Strategies in the Management of Resources and Supplies, by Alessandro Salvador and Jacopo Calussi

FOURTH PART: RACE, GENDER, AND THE INTERACTIONS OF OCCUPIERS AND OCCUPIED PEOPLE

Chapter 9: Women of the Reich: German Military Auxiliaries and the Occupation of Europe, by Julia Torrie

Chapter 11: The Volksdeutsche of Eastern Europe as Nazi Collaborators during World War II, by Christoph Schiessl