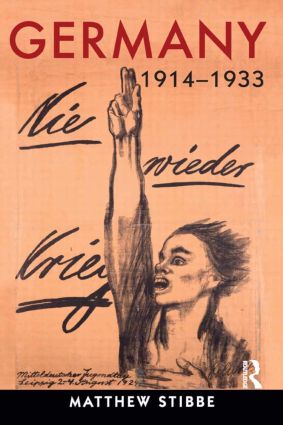 Germany, 1914-1933: Politics, Society and Culture takes a fresh and critical look at a crucial period in German history. Rather than starting with the traditional date of 1918, the book begins with the outbreak of the First World War in 1914, and argues that this was a pivotal turning point in shaping the future successes and failures of the Weimar Republic.

Combining traditional political narrative with new insights provided by social and cultural history, the book reconsiders such key questions as:

The book also provides a thorough and comprehensive discussion of the difficulties faced by the Weimar Republic in capturing the hearts and minds of the German people in the 1920s, and of the causes of its final demise in the early 1930s.

Introduction. 1 The War From Above. 2 The War From Below. 3 Political and Psychological Consequences of the War. 4 Economy and Society in the 1920s. 5 Weimar Culture. 6 The Final Years of the Republic. Conclusion.

Matthew Stibbe is Reader in History at Sheffield Hallam University. He has published widely in the field of First World War studies and modern German history, and his books include British Civilian Internees in Germany: The Ruhleben Camp, 1914-18 (2008) and Women in the Third Reich (2003).