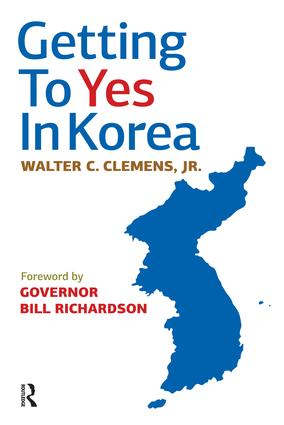 Getting to Yes in Korea

President George W. Bush had pinned North Korea to an "axis of evil" but then neglected Pyongyang until it tested a nuclear device. Would the new administration make similar mistakes? When the Clinton White House prepared to bomb North Korea's nuclear facilities, private citizen Jimmy Carter mediated to avert war and set the stage for a deal freezing North Korea's plutonium production. The 1994 Agreed Framework collapsed after eight years, but when Pyongyang went critical, the negotiations got serious. Each time the parties advanced one or two steps, however, their advance seemed to spawn one or two steps backward. Clemens distils lessons from U.S. negotiations with North Korea, Russia, China, and Libya and analyses how they do-and do not-apply to six-party and bilateral talks with North Korea in a new political era.

“This book points to valuable lessons from the approaches to North Korea taken by Jimmy Carter and Bill Clinton compared to those taken by George W. Bush and his entourage. Drawing on the value-creating/value-claiming framework of the Harvard Negotiation Project and his own studies of security negotiations with Moscow and with Beijing, Professor Clemens suggests guidelines for moving the Korean peninsula from a flash point to a zone of peace and cooperation. As this book makes clear, negotiations are not just possible but essential to avoiding war in Northeast Asia.”

--Governor Bill Richardson, from the Foreword

"Walter Clemens has utilized his expertise in U.S.-Soviet relations while applying negotiating theory and the role of culture to produce a fascinating study of the North Korea nuclear problem."

“Drawing on experiences of statesmen from Jimmy Carter to Bill Clinton, as well as insights from negotiating strategy, Walter Clemens offers a valuable toolbox for addressing North Korea’s nuclear challenge.”

“Readers of Walter Clemens know that his books are invariably smart, witty, and imaginative. Getting To Yes In Korea is no exception, while also offering sensible and practical advice on how to transform the peninsula from a ‘cockpit for nuclear war into a zone of cooperation for mutual gain.’ Policy makers and scholars would be well-advised to listen closely to Clemens.”