Giovanni Gabrieli and His Contemporaries
Music, Sources and Collections 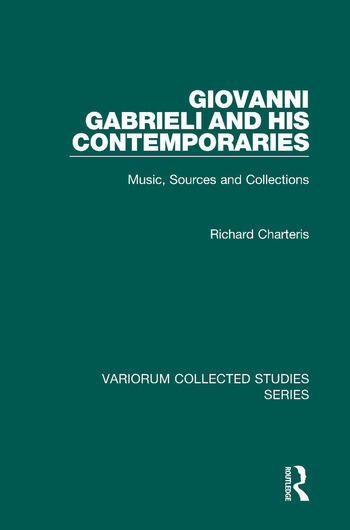 Giovanni Gabrieli and His Contemporaries: Music, Sources and Collections

For more than three decades Richard Charteris has researched European music, sources and collections, focusing particularly on late Renaissance England, Germany and Italy. This group of essays, many concerning previously unknown or unexplored works and materials, covers the 16th and early to mid 17th centuries. The studies involve variously 'new' compositions, music manuscripts and editions, and documents that relate to figures such as the Italians Giovanni Gabrieli, Claudio Monteverdi and Alfonso Ferrabosco the Elder, the Germans Hans Leo Hassler and Adam Gumpelzhaimer, as well as the Englishmen John Coprario, John Dowland, John Jenkins, Henry Lawes, William Lawes, Peter Philips, and the French composer Marin Marais. In addition, Charteris elucidates contemporary performance practice in relation to works by Gabrieli, investigates printed music editions that originated from the Church of St Anna, Augsburg, and evaluates materials in collections, inlcuding ones in Berlin, Hamburg, KrakÃ³w, London, Regensburg and Warsaw.

Contents: Introduction; Newly discovered manuscript parts and annotations in a copy of Giovanni Gabrieli's Symphoniae sacrae (1615); Giovanni Gabrieli's Sacrae symphoniae (Venice, 1597): some rediscovered partbooks with new evidence about performance practice; A new keyboard work by Giovanni Gabrieli and the relevance of its compositional technique; Autographs of John Coprario; 'Fuerunt mihi lacrymae': Alfonso Ferrabosco the Elder or the Younger?; A rediscovered manuscript source with some previously unknown works by John Jenkins, William Lawes and Benjamin Rogers; New motets by Hans Leo Hassler: indications of second thoughts; A newly discovered songbook in Poland with works by Henry Lawes and his contemporaries; An early-17th-century collection of sacred vocal music and its Augsburg connections; New connections between Eastern Europe and works by Philips, Dowland, Marais and others; A neglected anthology of sacred vocal music dating from the 16th century; Addenda and corrigenda; Indexes.

Richard Charteris is Professor in Historical Musicology at the University of Sydney, Australia

'Most musicians (especially brass players) and music students are familiar with some of the works by Giovanni Gabrieli and some aspects of his life, but few are aware of Gabrieli’s impressive total output or of his influence on the development of compositional style in the early 17th century. Fortunately, Richard Charteris does. He has been working on Gabrieli for much of his life, and this book contains 11 superb essays on the subject that he published between 1975 and 2009... If you want to know more about Gabrieli, this would be a good book to own.' Early Music America 'The articles are the product of meticulous research.' The Consort