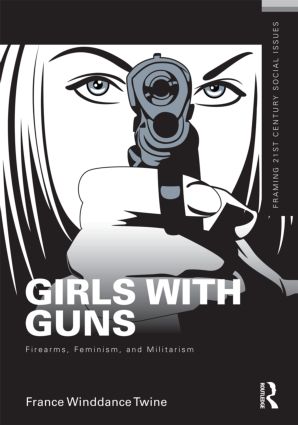 A nuanced understanding of state violence and gender (in)equalities must consider the varied and contradictory experiences of armed civilian women, female soldiers, and opponents of gun possession. How is ‘feminism’ and ‘femininity’ negotiated in the early 21st century by civilian and military women in a nation that fetishizes guns? This book addresses this social problem by offering a comparative analysis of the particular dilemmas that gender inequality, class inequality, race/racism and U.S. nationalism generate for women of diverse backgrounds who are struggling to balance conventional gender roles, femininity and gendered violence in the United States.

France Winddance Twine is Professor of Sociology at the University of California, Santa Barbara. She is an ethnographer, a critical race theorist, and a documentary filmmaker who earned her degree at the University of California, Berkeley. She has published more than 60 books, journal articles, book reviews, and essays. She is the author and an editor of eight books, including Geographies of Privilege (forthcoming, 2013), A White Side of Black Britain: Interracial Intimacy and Racial Literacy (2010), Outsourcing the Womb: Race, Class, and Gestational Surrogacy in a Global Market (Routledge, 2011), Retheorizing Race and Whiteness in the 21st Century (with Charles Gallagher, Routledge, 2011), and Feminism and Antiracism: International Struggles for Justice (New York University Press, 2000). She has served as deputy editor of American Sociological Review, the official journal of the American Sociological Association. Twine currently serves on the international editorial boards of the journals Ethnic and Racial Studies, Sociology, the official journal of the British Sociological Association, and Identities: Global Studies in Culture and Power.

The goal of this new, unique Series is to offer readable, teachable "thinking frames" on today’s social problems and social issues by leading scholars, all in short 60 page or shorter formats, and available for view on http://routledge.customgateway.com/routledge-social-issues.html

For instructors teaching a wide range of courses in the social sciences, the Routledge Social Issues Collection now offers the best of both worlds: originally written short texts that provide "overviews" to important social issues as well as teachable excerpts from larger works previously published by Routledge and other presses.