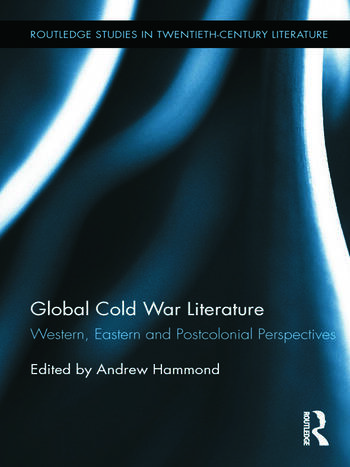 In countries worldwide, the Cold War dominated politics, society and culture during the second half of the twentieth century. Global Cold War Literatures offers a unique look at the multiple ways in which writers from Asia, Africa, Europe and North and South America addressed the military conflicts, revolutions, propaganda wars and ideological debates of the era.

While including essays on western European and North American literature, the volume views First World writing, not as central to the period, but as part of an international discussion of Cold War realities in which the most interesting contributions often came from marginal or subordinate cultures. To this end, there is an emphasis on the literatures of the Second and Third Worlds, including essays on Latin American poetry, Soviet travel writing, Chinese autobiography, African theatre, North Korean literature, Cuban and eastern European fiction, and Middle Eastern fiction and poetry.

With the post-Cold War era still in a condition of emergence, it is essential that we look back to the 1945-89 period to understand the political and cultural forces that shaped the modern world. The volume’s analysis of those forces and its focus on many of the ‘hot spots’ – Afghanistan, Iran, North Korea – that define the contemporary ‘war on terror’, make this an essential resources for those working in Postcolonial, American and English Literatures, as well as in History, Comparative Literature, European Studies and Cultural Studies. Global Cold War Literatures is a suitable companion volume to Hammond's Cold War Literature: Writing the Global Conflict, also available from Routledge.

Notes on Contributors  Acknowledgements  On the Frontlines of Writing: Introducing the Literary Cold War Andrew Hammond  1. Anti-Communism on the American Stage Brenda Murphy  2. Factography and Cold War Ideology in the Cuban Detective Novel Ignacio López-Calvo  3. Cross-Border Representation in South and North Korean Literatures of the Cold War Period Joanna Elfving-Hwang  4. Endangered Nation: The Literature of Soviet-Occupied Afghanistan Wali Ahmadi  5. Hiroshima, or Peace in a ‘City of Cruelty and Bitter Bad Faith’: Japanese Poetry in the Cold War Ann Sherif  6. Reflections of the Cold War in Modern Persian Literature, 1945-1979 Nasrin Rahimieh  7. The ‘Boom’ Novel and the Cold War in Latin America Neil Larsen  8. Contested Nationalisms and Socialisms: The Role of Theatre in Seeking Liberation for and between Ethiopia and Eritrea Jane Plastow  9. ‘With Friends Like These…’: Soviet Travel Writing about Czechoslovakia during the Khrushchev Era Margarita Marinova  10. Russian and American Satirists and the Exposure of Cold War Fictionalities Derek C. Maus  11. Cold War Protest in East and West German Political Song David Robb  12. Chinese Women’s Autobiographical Practice in the Early Post-Mao Era Lingzhen Wang  13. A Corneillian Cold War: Mainstream French Political Drama of the 1950s Jamie Andrews  14. East-Central Europe and the Search for a Literature of the ‘Third Way’ Marcel Cornis-Pope  Works Cited  Index

Andrew Hammond is a Senior Lecturer in English Literature at the University of Brighton, UK. In both research and teaching, he has specialised in Cold War fiction, postcolonial writing and cross-cultural representation. His publications include Cold War Literature: Writing the Global Conflict (2006), The Debated Lands: British and American Representations of the Balkans (2007) and British Literature and the Balkans: Themes and Contexts (2010).