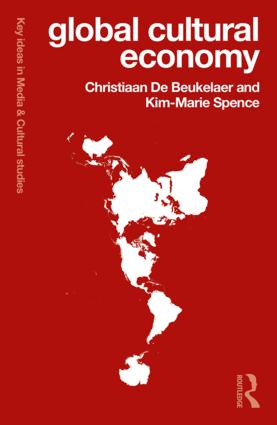 Global Cultural Economy critically interrogates the role cultural and creative industries play in societies. By locating these industries in their broader cultural and economic contexts, Christiaan De Beukelaer and Kim-Marie Spence combine their repertoires of empirical work across four continents to define the ‘cultural economy’ as the system of production, distribution, and consumption of cultural goods and services, as well as the cultural, economic, social, and political contexts in which it operates.

Each chapter introduces and discusses a different theme, such as inclusion, diversity, sustainability, and ownership, highlighting the tensions around them to elicit an active engagement with possible and provisional solutions. The themes are explored through case studies including Bollywood, Ghanaian music, the Korean Wave, Jamaican Reggae, and the UN Creative Economy Reports.

Written with students, researchers, and policy-makers in mind, Global Cultural Economy is ideal for anyone interested in the creative and cultural industries, media and cultural studies, cultural policy, and development studies.

Global Cultural Economy is a welcome addition to the literature on cultural economies, contributing valuable observations and analyses from beyond the ‘west’. At the same time, the authors draw on the reports of intergovernmental organizations such as UNESCO and UNCTAD as primary source material, thus turning the gaze on these organizations as much as the analysis is focused on the destinations which they influence. This book thus offers new perspectives and opens up new debates.

This book provides a fascinating tapestry and kaleidoscope on the commodification of culture and cultural practices, with much food for thought for anyone remotely interested in contemplating the resultant homogenisation of the world’s creative imagination and diversity.

This must-read book critically clears a path through the thicket of preconceptions within celebratory, aspirational, critical, agnostic and reflexive perspectives regarding the creative industries. The authors frame a wide range of cultural practices and industries through a carefully defined cultural economy that highlights social organization, cultural context and political economy, without prioritising economic gain or social amelioration, the twin criteria of much creative industries hype.

Until now, both research and policy-making on the contributions of culture to societies have been blinkered: by Eurocentrism, ideas-faddism, and an unerring belief in the divine power of economic growth. In Global Cultural Economy, Christiaan De Beukelaer and Kim-Marie Spence provide a timely and welcome corrective: questioning axioms, widening the empirical field beyond the Global North, and broadening the debate to consider what really matters to the flourishing of diverse creative lives.

In spite of the fact that concept of creative industries had been developed in a Western world, creative economy of numerous countries in development are using music, film, television and design to achieve economic impact on both local and world markets. This book skillfully combines global approach with focus on very specific case studies that can be assessed as exemplary practices of re-evaluating national cultural traditions in larger market and business perspectives. Challenging research covered places that are not often in the heart of scholars’ attention (Burkina Faso, Jamaica, Kazakhstan, Trinidad and Tobago) together with more known examples of Bollywood or K-pop.

The discussions dare to challenge numerous controversial issues of creative economy concept showing authors’ expertise and vast knowledge of body of literature from all around the world starting with knowledge economy to the political economy of piracy. As creative economy is and should be based on copyrights, on social justice and politics of equity that are often contradicting each other, authors question policies and market practices that are fostering or preventing successful development in this domain.

The book is written in a manner that can be accessible to both scholars and practitioners. It is transdisciplinary in its content as challenging intellectual property and cultural and social rights, cultural appropriation and national ownership, intercultural exploitation and many other post-colonial issues that the raise of local creative economies is underlining. Thus, it is much more than the book about economy – it is a book about need for re-establishment of the new ethics of international cultural relations within the scope of global cultural economy, and the book about need to re-conceptualize public-private relations in the traditional fields of culture and cultural policies.

Variety of academic disciplines might use this book as a learning tool: economy and business management, cultural management, cultural policy, international cultural relations, law and legal studies, but also studies on nationalism, interculturalism and post-colonial cultural studies. Cases that were presented and policy recommendations might be further discussed and developed in classrooms around the world, specifying and remodeling them for local contexts that want to oversee themselves in a global world.

Global Cultural Economy is a passionate account of global creative production and is particularly relevant to non-Western cultural economy. The authors put into context – and question – common perceptions of the role that cultural and creative industries have in today’s world. Most notable is the connection the authors make between cultural economy and issues concerning global human development, which promotes a new sense of urgency to the impact cultural connections have. The book is a timely publication on current concerns in the global cultural sphere.

Christiaan De Beukelaer is a Lecturer in Cultural Policy at the University of Melbourne, Australia. He is the author of Developing Cultural Industries: Learning from the Palimpsest of Practice (2015), and the editor of Culture, Globalization, and Development: The UNESCO Convention on Cultural Diversity (2015, with Miikka Pyykkönen and JP Singh) as well as Cultural Policies for Sustainable Development (2018, with Anita Kangas and Nancy Duxbury).

Kim-Marie Spence is a PhD scholar at the Australian National University. She has done significant research comparing the popular culture industries of Jamaica, India, and South Korea, that is, reggae, Bollywood, K-pop, and K-drama. She is a Rhodes Scholar and former Jamaica Film Commissioner/Head of Creative Industries in Jamaica and also worked with UNESCO on Oral and Intangible Heritage projects.

The Key Ideas in Media and Cultural Studies series covers the main concepts, issues, debates and controversies in contemporary media and cultural studies. Titles in the series constitute authoritative, original essays rather than literary surveys, but are also written explicitly to support undergraduate teaching. The series provides students and teachers with lively and original treatments of key topics in the field.