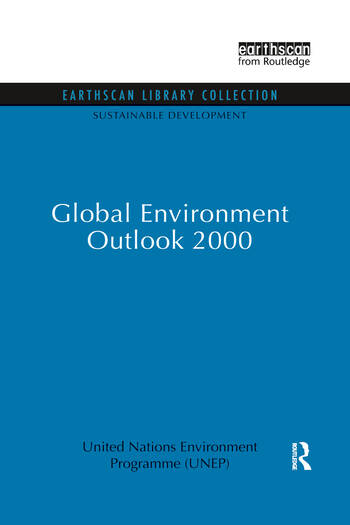 'The continued poverty of the majority of the planet's inhabitants and excessive consumption by the minority are the two major causes of environmental degradation The present course is unsustainable and postponing action is no longer an option. Inspired political leadership and intense cooperation across all regions and sectors will be needed to put both existing and new policy instruments to work. ' From the Synthesis Global Environment Outlook 2000 (GEO-2000) is a comprehensive and authoritative review and analysis of environmental conditions around the world. It is the flagship publication of the world's leading environmental organization, the United Nations Environment Programme (UNEP), and is based on information provided by more than 30 regional and international collaborating centres. The book presents a region-by-region analysis of the state of the world's environment, highlighting key global concerns and making recommendations for policy action. The regions covered include Africa, Asia and the Pacific, Europe and Central Asia, Latin America and the Caribbean, North America, West Asia and the Polar Areas. Chapter 1: Global Perspectives describes the main drivers of environmental change, such as the economy, population growth, political organization and regionalization, as well as potential impacts of recent global developments including the growth of the consumer culture, trade and international debt. Chapter 2: The State of the Environment provides a global and region-by-region overview of the environment at the end of the second millennium. The chapter covers global issues such as ozone, climate change, El Nifio and nitrogen loading, and universal issues of land and food, forests, biodiversity, freshwater, marine and coastal areas, atmosphere and urban areas. Chapter 3: Policy Responses reviews the broad range of policy instruments and responses being used to address environmental issues, including multilateral environmental agreements, and analyses the difficulties of compliance, implementation and assessment. Chapter 4: Future Perspectives looks at environmental issues that will require priority attention in the 21st century and some alternative policy options that could be used in the regions. Chapter 5: Outlook and Recommendations makes recommendations for future action based on the environmental legacy left by past and present policy and management systems. GEO-2000 will be the benchmark reference and guide to the state of the global environment. Written in clear, non-technical language and supported throughout by informative graphics and tables, it is essential reading for all those involved in environmental policy making, implementation and assessment, and for researchers and students of regional and global environmental issues. Originally published in 1999